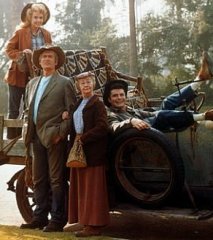 15. Lucius Malfoy (Is he really that rich? I musta missed that thread in Potter.)

13. Lara Croft (No comment - not into Lara Croft. Is she rich? I mean, rich enough to make the top 15 of fictional characters. Color me skeptical.)

12. Ebenezer Scrooge (Which one? The Alistair Sim one or the Mr. Magoo one?)

10. Willy Wonka (The Gene Wilder one or the Johnny Depp one?)

9. Thurston Howell III (But don't him confused with the Mr. Magoo Scrooge, even though they sound just alike.)

6. Scrooge McDuck (I think he should be farther up the list, personally.)

5. C. Montgomery Burns (Yessssssssss, again, but with a different accent!)

4. Lex Luthor (OK, if we're going to reach back to Lex Luthor, we might as well go back to King Midas, who - if you'll notice - doesn't even appear on the list. I know he's richer than Lucius Malfoy.)

3. Richie Rich (Weak entry -we can come up with better than this, right fellow readers/movie watchers?)

1. Santa Claus (I'm troubled by this one. Santa's real, ain't he? What's he doing on the fictional list?)

I think Forbes needs some help. Suggestions?
Posted by MaryB at 4:49 PM

No list of rich fictional made-up folks would be complete without Michael Jackson. I mean, he's the most made-up there is. Can't be real...

Good one, Frank. "The Millionaire" benefactor himself (we never saw him, did we?). And that was when a million bucks was real money.

Winston, we can put Michael in Santa's place, since MJ's fictional and Claus is real. (But is Michael still solvent?)

Santa Claus? Rich? Is he? He lives in a snow house with lots of elves. Not in a 14-bedroom mansion in the Hamptons with a Mexican maid!

Midas isn't in the list because he's not fictional: http://www.phrygians.com/midas.html

[Actually, no. I really like being a pedant. If I'm going to be pedantic about it.]

I realized after I'd posted about King Midas that I hadn't been clear regarding the real vs. myth. Unless, of course, the touch of the real King Midas could turn everything to gold. Kinda like the St. Nicholas vs. Santa Claus thing. (Except that there is a real Santa Claus.)

Ah, pedantry, thy name is PT! I figured it wouldn't take long for someone to call me on it.

What, no Miss Havisham??

Good candidate, Nobody - any idea what she's worth?

What about Charles Foster Kane?

Kane is definitely an inspired suggestion (oh look! he was on the list a few years ago. Also Gatsby). Reminds me also of the newspaper magnate in The Fountainhead.

There's also a multi-billionaire at the centre of Don DeLillo's Cosmopolis, but he's certainly not on the cultural landscape to the same extent as the others.

Yeah, Isabella - I saw where both Kane and Gatsby had fallen off the list, but I'm not buyin' it. How does Daddy Warbucks' and Lex Luthor's wealth increase but not Kane's or Gatsby's? I think Forbes is monkeying with the numbers, personally. :-)

What about Geoff Tracey of "Thunderbirds are go!" fame?

For my Money, Gomez Addams has to be in the top ten. The man owns companies he's completely forgotten about. He's into Oil, Insurance, Railroads, Stocks, and god knows what else, not to mention his inheritance. He keeps hundreds of thousands of dollars in a desk drawer, and he is more than happy to pay $25,000 to rent a Santa Claus Outfit for christmas.