All right, I'm tossing out a few - and only a few - of the holiday films that have surfaced since the 1960s. All on the list are theatrical releases with two exceptions: The House Without a Christmas Tree and A Child's Christmas in Wales (both made for television). Maybe - probably - your favorite isn't on here, so feel free to shake your fist at the computer screen and tear off a (lovingly) huffy comment. However, here are the goodies that come to my mind (in no particular order):

The House Without a Christmas Tree (1972). Jason Robards, Mildred Natwick, Lisa Lucas - all wonderful in this made-for-TV story about a bitter father, a loving grandmother, and a clever girl who just wants a Christmas tree in the house. Takes place in post-war (WWII) Nebraska. Jason Robards has the just-bubbling-under-the-surface anger down pat, but Lisa Lucas is more than a match for him. If you click on the link, you'll reach the Amazon review - one of the comments is from Lisa her-own-bad-self. Kate and I love this one.

A Christmas Story (1983). Well, what's not to love? Peter Billingsley is adorable, but not sickeningly so, as Ralphie - the kid that just wants a Red Ryder BB Gun for Christmas. The entire cast is brilliant - Darren McGavin, Melinda Dillon, all the kids. It's funny and charming, and most of us have seen it a thousand times. And will watch it another thousand or two. Certain to be added to the old-time classic list, alongside White Christmas and Miracle on 34th Street.

One Magic Christmas (1985). It's Disney, but don't let that scare you off. It's a dark tale (too dark, some critics thought) - death, job loss, kidnapping - with a sort of It's a Wonderful Life twist. Mary Steenburgen - fabulous, as always - as the mom who has too much on her shoulders to feel Christmasy. And the brilliant (but kinda scary) Harry Dean Stanton, as your not run-of-the-mill angel.

Home Alone (1990). The ultimate kid-revenge film. Still love this one, just because. Don't know why. Catherine O'Hara is worth sitting through anything. And how much can Joe Pesci and Daniel Stern take? Sheesh. Keep the change, ya' filthy animal!

National Lampoon's Christmas Vacation (1989). Ah, the Griswolds. You either love 'em or hate 'em, but many of us can identify with whacky relatives landing on our doorsteps and sweating out a Christmas bonus.

A Child's Christmas in Wales (1987). Finally - this is available on DVD. A beautiful version of Dylan Thomas' classic short tale, starring Denholm Elliott as the grownup remembering those snowy holidays in Wales. Very true - line by line, almost - to the book. Do grab this one if you haven't seen it.

The Snowman (1982). Based on the Raymond Briggs picture book. Glorious music and stunning crayon-like animation. Nominated for Best Short Animated Film Oscar and won the BAFTA for Best Children's Programme. Except for a brief voice-over set-up, the film has no voice-over, which I find very soothing. Love the flight to the North Pole and the snowman that does the Highland Fling.

Love Actually (2003). OK, stop groaning. Granted, there are about 6 too many stories being told and I get confused about who knows who, but I like that they don't all have happy endings. And Emma Thompson deserved an Oscar for that 30-second scene in the bedroom when she realizes hubbie Alan Rickman is having an affair - wow! And I like when Prime Minister Hugh Grant stands up to US President Billy Bob Thornton. (And ain't it hi-larious to even conceive of "Prime Minister Hugh Grant" and "President Billy Bob Thornton"???) 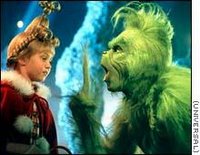 How The Grinch Stole Christmas (2000). The live-action one, with Jim Carrey. I found all the gizmos and sets fascinating - very Seussical. "I'm an idiot!"-"You're an idiot!" echo-fest never fails to make me laugh. And did you catch the little scene when Baby Grinch is dropped at the party house, and the Whos are doing the 1970s keys-in-fishbowl thing? Ha! Ya-Whos!

OK - now hit me with your Bad Santa, Christmas with the Cranks, and Ernest Saves Christmas.
Posted by MaryB at 9:44 AM

Elf. Laughed my donkey off - after expecting it to be not very funny at all.

Notice that "Nightmare Before Christmas" is missing from your list. An error? Or did you think it was as dull as I did?

I think of "Nightmare Before Christmas" as more of a Halloween movie - at least it feels more Halloweeny to me. I know it revolves around Jack trying to spread Christmas to the Halloween folks, but, still - nope, it's a Halloween movie to me. I didn't find it dull; I rather enjoy watching it. At Halloween. But I can see how some people would stick it in the Christmas pile.

A lot to love about Elf, though. Like when he goes ballistic over the store "Santa Claus." (And you laughed your what off??)

It's what we call an "ass" over here.

I was TRYING to be polite! Humph!

I love A Christmas Story and Love Actually. And the remake of Miracle on 34th Street, which we've already agreed to disagree on.

Also I forgot to comment on the pre-1960 one the 1955 We're No Angels. Peter Ustinov is brilliant (yeah, and that Bogart fellow too). Very funny movie.

Nightmare Before Christmas is *the* Halloween staple in my house, but I wouldn't consider it a Christmas movie either. Then again, there's never a bad time for Jack. My 2 year old could identify Jack's face long before Cinderella or any of those (no, before you call social services, we do not let her watch the movie. I've just got some Jack peraphernalia, is all).

I found your blog googling Christmas movies of the 1960s and it's funny that there's not ONE on the list made in that decade. Does such a thing as a good '60s Christmas movie exist? THANKS

Anonymous - Hmm. Good point. The only ones I can think of are animated classics like Charlie Brown Christmas, Rudolph, Grinch, Mr. McGoo's Christmas Carol, etc. (I mentioned some of these under "Life Lessons" http://shortypjs.blogspot.com/2005/12/christmas-movies-part-i-life-lessons.html) But classic, full-length Christmas films of the 1960's? Let me think. Bell, Book, & Candle? Nope, that was 1958. I'm open to suggestions!