Terror in the Sink 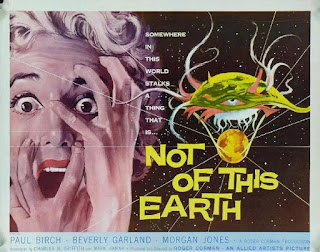 I hate having to be brave first thing in the morning. Or any time, really, because I'm your basic Monty Python-run-away! kind of gal. And this was procrastination-brave, since the battle started last night.

Well, it's the South. It's summertime. You're going to come across the occasional giant flying roach in the kitchen or bathroom ready to make a sudden move and scare the shit out of you, no matter how Clorox-ed and Pine Sol-ed your home may be. OK. I'm a Southern girl. I get that. But somehow that doesn't prepare you for the sudden appearance of a sci-fi creature when you nonchalantly walk into the kitchen for an evening snack.

There it was. Huge. In the sink on the right with a slotted drain, not the disposal sink. Shit! (Sorry, but, yeah, shit!) I deftly reach under the sink for the Raid. To hell with environmental concerns, there's a giant roach in my sink. I spray it like crazy, and the Godzilla-like roach heads for the drain.

Now, roaches seem to be able to squeeze even their most ginormous shiny brown selves though cracks in baseboards, sealed doorways, or tightly packed books. But this guy just couldn't manage to make it through one of the drain-slots. Wiggling, flipping. Flipping, wiggling. Nope. Just a big ol' nasty glob blocking the drain. Why, oh why, couldn't it have landed in the disposal sink? But no.

If you have any experience at all with roaches, you know it takes forever for them to die. Honestly, You can come up on one that's been lying in the sun with curled up legs for three days, give it a nudge, and it flips over and skitters away. Knowing this, I was definitely not going the valorous route last night. These bugs have a way of crawling off and giving up the ghost elsewhere. So. Forget the snack. Try not to inhale too much Raid-fume. Turn out the light. Check on it tomorrow.

Hoping against hope, I walked into the kitchen and, with one eye squeezed shut, glanced toward the sink drain. Still there. Big old brown blob. So I do what any brave soul would do in this situation and pulled off 14 paper towels, wadded them up and dug into the sink - trying to stay well-protected but agile enough to grab it. No luck. Still there. This really was calling on more strength than a Saturday morning afforded me.

Necessity. Mother. Invention. Or. Whatever works. Chopsticks. The original plan was to sushi-it and drop it outside. Alas, my chopstick skills were not coming to the fore for this particular delicacy, so I just started poking. Poking, poking, poking into one of the drain slots. What on earth are roaches made of? I stood poking - hard, hard, hard - for what seemed like forever. Finally, it started to break up and with the help of lots of water, disappeared to the netherworld of wherever sink drains lead. More soap and Clorox and paper towels to get the roach-aura out of the sinks and off the counters.

Welp, I feel as though I've slain ten dragons. On a sunny summer Saturday morning in the South, knowing that while the battle may have been won, the war is far from over. But I live to fight the roach-king another day.

Death is a strange thing

I love memorable passages from books I read and keep a journal of them so that I can be re-delighted with them in one handy place. This one came near the end of a wonderful book called A Man Called Ove by Fredrik Backman. (Thanks for the recommendation, Liz Hinds!)

It's about an unlikeable old coot who keeps trying to kill himself to be with his dear, recently deceased wife. Alas, people and circumstances keep interfering. The book is as funny and endearing as Ove is cranky. That's all I'm going to say about it, except grab a copy and read it.

OK. So my favorite passage comes near the end. Full of truth. Ponder, if you will: 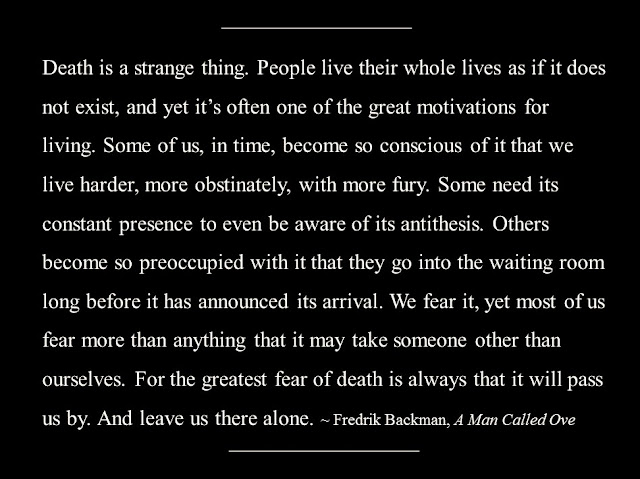 I won't give away the ending, but be prepared to line up behind either Saab or Volvo for car preference, then accept the consequences. And I believe the quote is on target: the fear of being passed over and left alone is the greatest.
Posted by MaryB at 9:50 PM 1 comment:


Such a gloomy time to be an American. The year was 1975. Watergate indictments. The fall of Saigon. Janis Ian's "At Seventeen." You think 2016 is bad? Ha!

Forty-one years ago we were weary of political hackery and a war that had gone on too long and taken too many young people. Caught between The Captain and Tennille and an impending disco revolution, music and fashion seemed to be letting us down. And yet, we were trying our darndest to generate some kind of enthusiasm for 1976's Bicentennial celebrations. Our hearts weren't in it.

Coca-Cola to the rescue! "Look up, America! See what we've got!" Stop yer whinin' and pull yerselves together! Things ain't so bad, eh? I mean, we have Times Square, Fred and Ginger, and baseball. And Coke. Simple. Naive. Rah-rah. But catchy. And moving. And you felt a teensy bit bettter about the old homeland. After all, how bad could it be if you have W.C. Fields and square dancing?

I love this commercial (remembering that it was a product of its time) and think that on this Independence Day 2016 we need reminding of what we have going for us. No, not the nativist, anti-immigrant, bigotry sort of patriotism; rather, the we're all in this together, we can work it out, we all have gifts energy that we're famous for. E pluribus unun: out of many, one.

Look up, America! E pluribus unum! Have a Coke! Happy 4th of July!