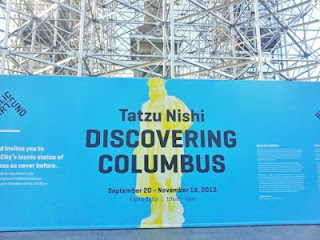 Imagine you live in an 800-square foot apartment with 16' ceilings in New York City. Yeah, that's pretty hard to imagine on an average salary. Anyway, let's just pretend. And your apartment is so cool that you have fabulous views of Central Park, Midtown Manhattan, and Columbus Circle. And in the center of your coffee table is a 13-ft statue of Christopher Columbus (Cristoforo Colombo, to his friends). Fortunately, you can pretend all you like, thanks to Public Art Fund's latest installation, Tatzu Nishi's Discovering Columbus. 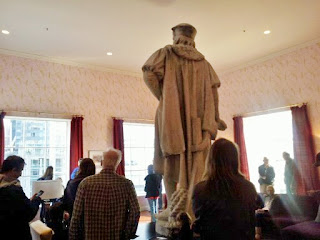 What Nishi has done is to encase the Columbus statue in Columbus Circle with scaffolding and stairs leading right to the top of the column. A trendy NYC apartment was built around the statue itself, complete with sofas, chairs, and a big screen television. Smack in the middle of the room, he's built a coffee table around the base of Columbus and scattered magazines on the table. Ho hum. Just another dust-collector in the living room, eh? 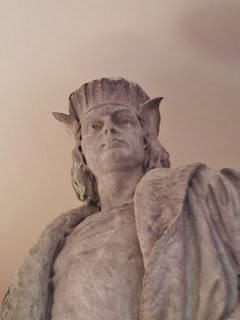 Except this is a unique experience to get a very up-close-and-personal look at a statue that most of us only see from a distance with our necks craned and eyes shielded against the sun. Think about it. Think about all the statues placed way on top of columns and towers that none of us really get a chance to examine (Nelson's Column, anyone?). Here, Nishi has given us the opportunity to see what the birds and a few photographers have seen. And really, I don't think the birds care one way or another.

I had to reserve my ticket ahead of time (it's free!), and I'd opted for a Sunday morning slot. Seemed like a worthy idea at the time. My fellow ticket-holders and I gathered at the base of the column and waited to be passed in by the ticket-takers. Then we climbed up six stories and entered the "apartment." The climb was not as bad as I anticipated. I even had breath left over when I reached the top. 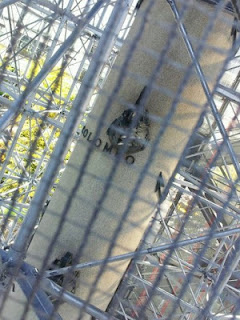 Perspective of the statue meant a chance to walk around big old Columbus and see the detail of his shoes, his robes, his eyes.

Perspective from the top of the Columbus column afforded fabulous views of a great city on a beautiful autumn day.

Perspective about the real Christopher Columbus? Well, you'll have to sort that out for yourself.

This exhibit isn't about Columbus the man but Columbus the statue atop a column in Columbus Circle, New York City. And from that perspective, it is awesome. Awesome to be given the opportunity to get so close to an historic monument, to be able to see it at eye-level. 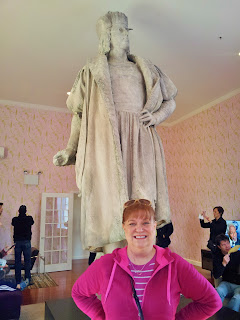 If you don't mind climbing up six flights of stairs and paying absolutely nothing to get cozy with a New York monument, I highly recommend Discovering Columbus.  You'll gain perspective on all sorts of things in that little sky top apartment at the southwest corner of Central Park.

Now, sitting in my own little NYC apartment, it's become painfully clear to me that should someone offer me the Columbus statue for my own home, I'd have to cut it off at the knees. It'd make a helluva coat rack, though.
Posted by MaryB at 3:58 PM 1 comment: