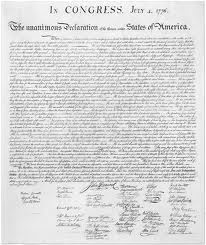 We hold these truths to be self-evident, that all men are created equal, that they are endowed by their Creator with certain unalienable Rights, that among these are Life, Liberty and the pursuit of Happiness.

I have a challenge for you today, my fellow Americans. In addition to my annual plea for everyone to take a few minutes to read the Declaration of Independence (it's quite short, so it won't cut into your barbecue-time), think of three things that you love about your country. Instead of getting caught up in petty partisan hatred - and yes, it does seem to be hatred at the moment - focus on three things that keep us together, make us who we are (the positive) at this time and place in history.

Don't get caught up in hollow bragging or boasting. Dig down for the real stuff. And don't wander off into the negative, the mistakes; save that for another day. Yes, there's a lot wrong. News flash: there always has been, because we're only - and always have been - human. Duly acknowledged. So let's shine a light on what we love about the United States of America today.

--That to secure these rights, Governments are instituted among Men, deriving their just powers from the consent of the governed, --That whenever any Form of Government becomes destructive of these ends, it is the Right of the People to alter or to abolish it, and to institute new Government, laying its foundation on such principles and organizing its powers in such form, as to them shall seem most likely to effect their Safety and Happiness.

A couple of months ago, I read Ron Chernow's George Washington. Things almost went to hell in a hand-basket after the American Revolution. It's a wonder the great general didn't throw up his hands and ride back to Mount Vernon to enjoy the life of a gentleman farmer. The arguments and battle of words and deeds among the new legislators sounded an awful lot like what we hear from Congress today. It was ever thus, my friends. So, like good old George, we just have to get up every day trying to make things better - encouraging civil discourse and new ways of doing things - to ensure the foundation holds.

And for the support of this Declaration, with a firm reliance on the protection of divine Providence, we mutually pledge to each other our Lives, our Fortunes and our sacred Honor.

Now, how can you ignore that pledge? Go out and celebrate the greatness of our country today, and save your bitching for another time. Happy Birthday, my country! 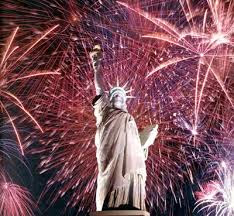