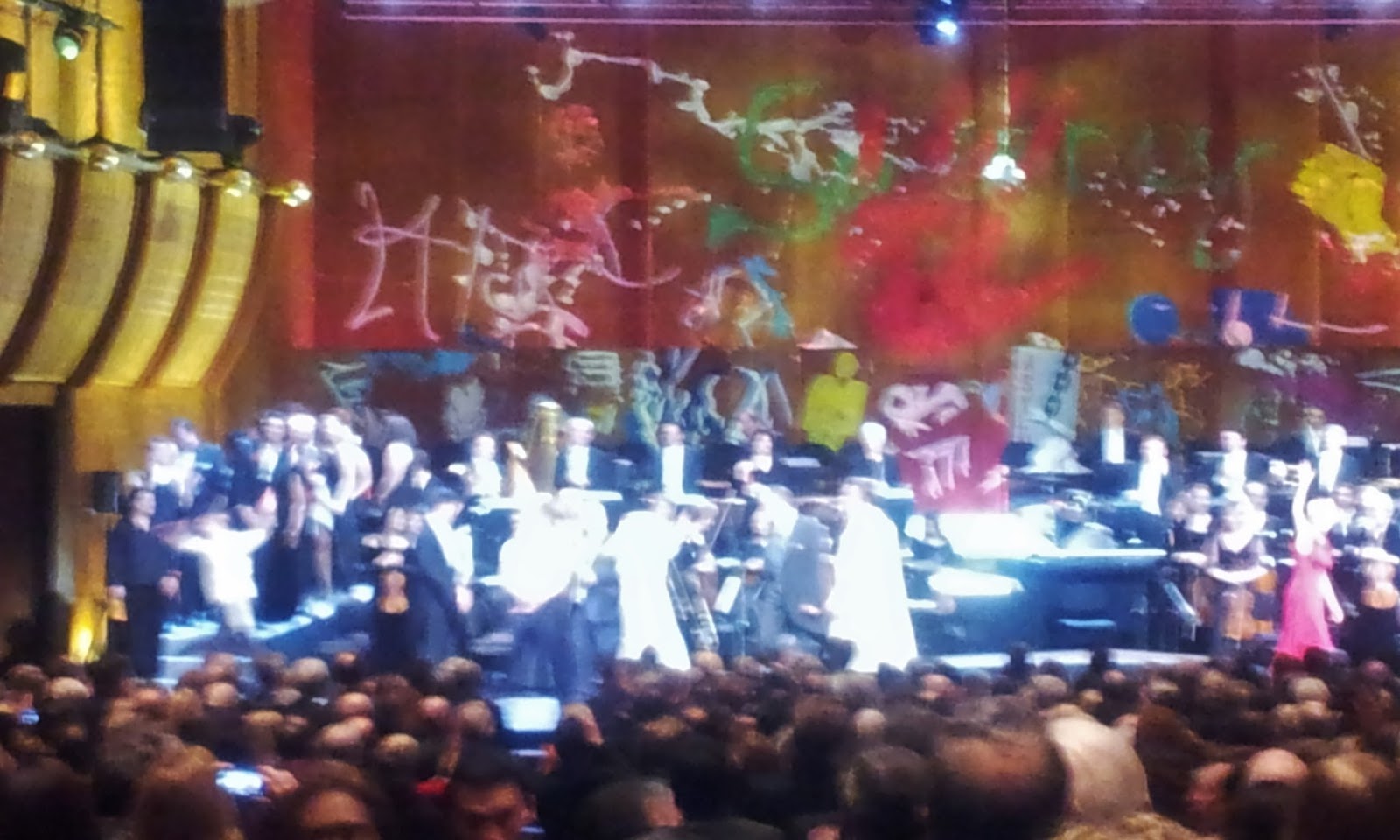 Great art has the power to knock you off your foundation and plant you in a different place. It is very rare, and maybe some folks never have that experience. I'm moved to say that I did get to experience foundation-knocking Wednesday March 5th at the New York Philharmonic's Sweeney Todd, the Demon Barber of Fleet Street, with Bryn Terfel and Emma Thompson.

The stars were properly aligned last October when I nabbed my ticket online. The impetus was the opportunity to see/hear Bryn Terfel in person. Ah, the man can sing. I had the funds, I was online at the right time, and - boom! - orchestra aisle seat for March 5. Only 5 performances, so no time to dawdle.  I'll admit I had my doubts about Emma Thompson's Mrs. Lovett being able to match Terfel's Sweeney, but, shoot, it's Emma Thompson, right? And it's Sondheim. And Sweeney Todd. Here. Take my money, and save me a seat.

I didn't stop to think that it was opening night of a 5-performance run. I had no idea what to expect, except that I knew Bryn Terfel would blow the roof off the place. And the Philharmonic. And Christian Borle as Pirelli. And Emma Thompson - even if she just sat on the stage and picked her nose, well, Emma Thompson. Add in Christian Borle as Pirelli and surprise cast member (noted as ? in the program) Audra McDonald as the mad woman, well, nothing short of perfection.

After a long and busy Ash Wednesday day at work, I crossed over to the West Side, had a nice dinner, and made my way to Avery Fisher Hall at Lincoln Center. The place was absolutely mobbed. I wormed my way into the crowd and let it carry me up the escalator and to my seat. I settled in, thinking I knew what I was going to see. I was well familiar with the score (it helps to have memorized Sondheim before turning 30) and story. But everything about this production exceeded my expectations.

The New York Philharmonic gave the music the treatment it deserved, well beyond what the normal Broadway orchestra is able to do. It was big and lush and spectacular. The orchestra was the focal point, of course, front and center and taking up most of the stage. The actors worked around the musicians, even using some of the instruments as props.

The cast marched on stage, all prim and proper, dressed in formal garb with their scores tucked neatly under their arms. They took their placed behind their music stands, and I thought, oh, OK, it's going to be a recital-type thing. But just as I was settling into that notion, each one tossed their books to the stage and started ripping off their dress clothes to reveal the seamy, dirty wardrobe better suited to this story of murder and questionable meat pies. And then it just took off.

I have never seen anything like it. Everything about this production was superb. I've seen many a fine production in my life, but this one blew everything else out of the water. The evening was spectacular and well worth any price paid to see it. And at the ending ovation, Emma Thompson ran out into the audience, grabbed Stephen Sondheim, and brought him on stage. Thrilling!

It made such an impression on me that I think it will be a while before I can see another musical, since I'll be comparing it to this production. Well done, New York Philharmonic, Bryn Terfel, Emma Thompson, and cast! Thank you for  giving me the experience of a lifetime. I'm so glad I attended the tale of Sweeney Todd.

Dust Thou Art, to Dust Returneth

Instead of attending a full-on worship service, I thought I'd give Ashes to Go a try this year. I'm not much on bells-and-smells, but no one loves a whackin' great pipe organ and Tiffany windows in a lovely old church or bewailing my manifold sins more than I, so this was a tiny little Lenten adventure for me.

There's a lot of pro-and-con about Ashes to Go, which is basically taking the prayers and imposition of ashes to the streets for any and all who want them. The pro-folk believe it to be a worthy evangelism effort, going to where people are - commuter stations, street corners, grocery stores - rather than requiring them to show up at a given time and given place. The con-folk believe that it is a cheap short-cut and that the imposition of ashes means nothing if you haven't fully confessed your sins (bewailed the manifold) and been granted absolution by a clergy-type.

Before I go any farther with this, I would like to lodge a protest against the name "Ashes to Go," which does smack heartily of the flip, the easy, the wink-wink-nudge-nudge. But I'll let that go. Here's where I stand on it. Meh. I can go either way. Ash Wednesday is way bigger than which method I use to get ashed. Yeah, I'll probably stick with the tried-and-true service from here on out, but my manifold sins feel no less bewailed (I don't need the Prayer Book for that) or my dusty beginnings and endings any less internalized because I opted to have myself reminded of them on the streets of New York rather than in a church.

Last year, I assisted one of our priests with Ashes to Go at 42nd and Lexington. We had a goodly number of folks line up for the prayer and ashes. All took it very seriously and were grateful for the opportunity to demonstrate their faith. The most memorable were a couple of down-and-out men, who solemnly received the ashes and prayers, said bless you, and seemed genuinely moved that someone had prayed with them and given them the sign of the cross in ashes on their foreheads. Who knows what it meant to them? But maybe it was the first time in a long while that someone had said a prayer with and for them. Maybe it was the first time someone had touched them in a positive way.

So here's the thing. If you don't like or approve of the Ashes to Go concept, don't go that route. If you want to try it, go ahead. Remember you are dust, and to dust you shall return, whether in a formal worship service or on busy city streets.