Back in the olden days we used to decorate a shoe box, cut a slit in the top, and bring it to school to collect our valentines. At some point in the day, the teacher would give us time to visit the boxes to put in our little cards (I always liked the flocked ones that I punched out of a booklet). Everybody pretty much got a valentine from everyone else - no hurt feelings, you know.

It's a good day to think about the folks we love, even if we no longer indulge in elementary school Valentine's Day parties. For those of you who have already decorated your Valentine Box, go forth and collect. For those of us who no longer break out the red and pink construction paper and glue, here's a little Valentine's day assignment for you.
Wishing you all a day of love and chocolate!
Posted by MaryB at 8:09 AM 2 comments:

"Della, get Paul Drake on the phone." 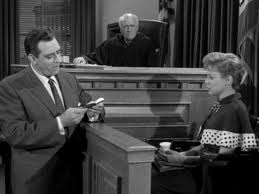 For the past couple of weeks, I've been lost in Perry Mason-land, thanks to Netflix. It's a world light-years away from our own Law & Order universe, which is what makes the trip so interesting. The stories and styles of the black-and-white 1950s are highly entertaining. No blood, no guts, and everybody's covered up, except for the occasional show-girl. And though things get a little racy once in a while and innuendo abounds, there's no embarrassing sex.

Episode titles like The Case of the Crimson Kiss and The Case of the Half-Wakened Wife (catching the innuendo, hm?) are cleverly corny, and the writers must've had a ball creating them. The iconic theme music, the men's hats and women's shirtwaist dresses, and the whopping great boat-cars nail the series' place in time. I think you can learn more about mid-1950s life and culture from shows like Perry Mason than from history books or newsreels.

The characters of modern day lawyer-cop shows must be green with envy. Perry, Della, and Paul get away with stuff that Jack, Olivia, and Lennie could never slide by the DA or Police Chief. Perry does some pretty outrageous things, like man-handling evidence, breaking and entering, and tricking witnesses. (Objection! Sustained.) Lt. Tragg and DA Burger don't stand a chance, because they're always two steps behind.

My mother loved Perry Mason, but as a kid I found it kind of boring. Now, I find the show interesting, entertaining. All sorts of soon-to-be-famous actors troop through. The stories are solid, albeit the legal angles are often laughable (which adds to the entertainment value). Plus, I can never quite figure out what's up between Della and Paul. As I said, much more interesting now.

I'll let you know if I come to any firm conclusion about Miss Street and Mr. Drake. But now it's time for The Case of the Black-eyed Blonde. No objection.
Posted by MaryB at 9:31 PM 2 comments:

One of the great things about living in New York City is the regular stream of mobster stories. You just don't get much of that in Atlanta, Georgia.

Anyway, the one that caught my eye recently was "Joey Cupcakes is Taken Down, from Rao's Wall."  OK, well two things caught my eye: "Joey Cupcakes" and "Rao's." See, I live right down the street from the infamous Rao's, the restaurant impossible to get into unless you know somebody, meaning the owner. It's famous for gangsters (not gangstas) and the likes of Woody Allen.

But the real story here is how some wise guy gets the name "Cupcakes" pinned on him. Gangsters are way ahead of gangstas in tagging their own. Websites abound that will generate a mob nickname - or a gangsta nickname, for that matter, but nothing comes up as brilliant as the real thing. Alas, the NYT article doesn't explain how Joey Cupcakes got his moniker. Sigh. But I like it. What's not to like about cupcakes? Kinda makes you underestimate him, which might be the point. 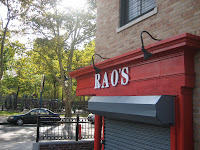 I'm trying to figure out what my own appropriate mobster nickname should be. I mean, I live right down the street from Rao's, and who knows?  I might need a gangster-name handy sometime soon. I don't really see myself attached to the animal kingdom (The Snake, The Ant, Bugsy). Scarface doesn't really work. But I really like the food-nickname option. Too bad Joey already has Cupcakes. I hear Lollipops is taken, too. Hmm. I'm leaning toward something connected to my Southern roots. Fried Chicken? Grits? Greens? I'll work on it.

In the meantime, I wonder where Joey actually buys his cupcakes? (And I hope this post won't get me taken down, and I don't mean from Rao's wall.)
Posted by MaryB at 12:08 PM 4 comments: 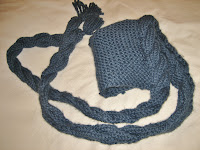 A couple of years ago, I posted about my need to find a hat that 1) kept my ears and head warm, and 2) didn't give me hat-head. And, yeah, #2 was the more important to me. No matter how the wind howls or the snow blows - and, Zeus knows, there's been a lot of that around here lately - I brave the elements hatless because I just haven't found anything that meets my hat requirements.

A few weeks ago childhood buddy Debbi offered to knit me a hat. Guaranteed warm. Guaranteed hat-headless. It arrived last week while I was in Atlanta, but when I got to work yesterday, there it was. In all its glory. A lovely blue, soft confection of a hat, with long scarf-ties, just waiting to be donned and walked around a New York block a time or two. 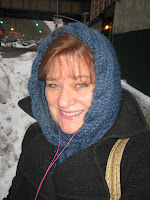 It is most definitely warm, covering my head and ears. It's thick and soft, not scratchy. The long ties wrap around to keep my neck warm. I can slip the hat off like a hood while I'm inside or riding the subway. And, believe it or not, you ruthless sceptics - no hat-head! It's genius! It's a miracle! It is the coolest - er, warmest - hat ever! And it was hand-made by a friend who has known me since the fifth grade.

In this most blizzardy year ever, my dear friend has knit with her own hands a hat that keeps me protected from the elements and doesn't flatten my hair. Whew. Just in time! A chapeau for the snow that keeps my hair status quo.
Posted by MaryB at 8:39 PM 5 comments: