Summer is my least favorite season. It's hot. It's humid. It sucks energy and creativity right out of me. The myth of long, glorious carefree days spent in chlorine or sand died out about the time I had to take on summer work during college. Still, there have been a few bright spots. Let's rate the summer so far, shall we?
Thumbs Up:
Thumbs Down: 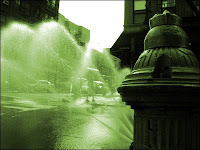 Well, fortunately, the whole dreary season should be over in a couple of months. Until then, I'll continue finding tiny bits of energy in a cold beverage, a dish of ice cream, or in my favorite chair letting the air conditioning work its magic.
Pass the cold cider and deodorant, please.
Posted by MaryB at 2:29 PM No comments:

I usually reserve posts about my GrandBoy for my GrandMary blog but can't resist spreading the joy to my Shorty readers, as well. This little video is good for what ails ya', especially if you're down in the dumps. Even baby-resistant folks have a hard time not laughing along with Liam, Kate, and her friend Allison. I'm just passing along the belly laughs, free of charge!

Writing in the Spirit and the Style 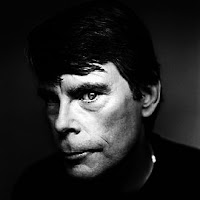 Fancy your business letters smack of Hemingway? Your blogs have an air of Margaret Mitchell? The short story you wrote in high school sound a bit like a Stephen King tale? Well, now you have a way to find out at "I Write Like," a website that lets you paste in a few paragraphs of writing and have it analyzed and compared to 50 famous authors.

According to the Associated Press, this fun little website isn't the brainchild of some English professor from Kenyon or Swathmore. Nope. The creator of "I Write Like" is a 27-year-old Russian (yeah, Russian) software programmer living in Montenegro (Montenegro? Really?). Oh, and English is his second language.

He modeled the whole thing on software for email spam filters, so the analysis is keyword based. Though some elements of style are considered, your word choices determine the results of your analysis more than sentence structure with this program. And so far, only fifty authors are a part of the analysis, but the young programmer promises to add more.
For example, there's no Herman Melville at present, but when a passage from Moby Dick is analyzed, it comes out as written by Stephen King. Go figure. Author Margaret Atwood, who is among the fifty authors, seems to be Stephen King, as well (she ran her own experiment). 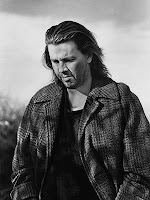 I ran a couple of blog entries, several short stories, notes taken from a meeting at work, and ad copy, just to see what came out. Results? One James Fenimore Cooper, one H.P. Lovecraft, and four David Foster Wallaces. Hm.  Oh, and I ran this blog post through the analyzer. Another David Foster Wallace.

Go on. Give it a try and see what you come up with. I'm going to keep trying until I get Eudora Welty or Dr. Seuss.
Posted by MaryB at 6:20 PM 4 comments: 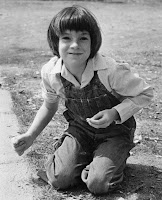 Of all the famous literary characters floating around out there, I've always most identified with Jean Louise "Scout" Finch in To Kill a Mockingbird. Tomboy. Check. Great daddy. Check. Tendancy to go anywhere posted as "off limits." Check. Dressing as a ham for Halloween. Well, no, but I would've if I'd've thought of it. (Darn!)


Today is the 50th anniversary of the book's publication, so it's been in the news a lot lately. I love the book, and I love the film. Alas, since TKAM is required reading in a lot of schools, I suspect many students hate it just because it's forced on them. Hope not. (A Tale of Two Cities and Silas Marner were required reading for me, and I ended up liking both.) I hope readers - students or otherwise - give Scout and Atticus, Jem and Calpurnia, Tom Robinson and Boo Radley a chance to work themselves into their lives. 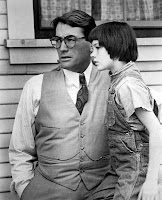 Yes, it's a book full of great characters. Still, the story's narrator hooked me like no other. Scout is honest, petulant, inquisitive, and plain-speaking. She tells it like it is and doesn't understand why the crazy adults are so off-balance. Scout is who I hope I am inside.
With all the anniversary hoopla come the haters. That's fine. If you don't like the book, you don't like the book. If you think it's simplistic or stereotypical or too Southern gothic, fine. But I happen to love it. And I do love the little tomboy Scout, who sees things in a way that only a kid can see. "Hey, Boo."

I haven't read To Kill a Mockingbird in a long time. A fine way to celebrate its Golden Anniversary is to pull it down and spend a little time with Scout.
Posted by MaryB at 9:43 PM 2 comments: 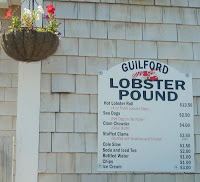 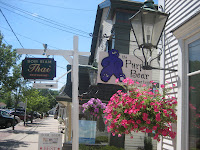 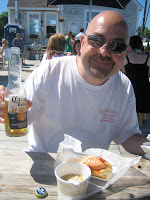 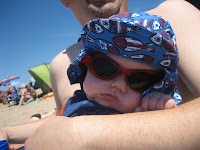 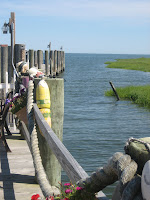 Regrets? Yes, one. That I don't have one of those Guilford Lobster Pound lobster rolls in front of me right now. Sigh.
Posted by MaryB at 5:12 PM 1 comment: