Letter to my 15-year-old self 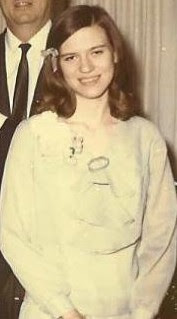 A few weeks ago a British newspaper asked some famous writers to compose a letter to themselves as teenagers. It was such an interesting exercise that I thought I'd try it myself. So here's my letter to 15-year-old Mary:

You look very young. I know the last thing you want is more advice from another adult, but I’m different from the others. I am you. I have walked in the very Capezios you’re now wearing. I’ve slept in your bed, shared that one bathroom with the rest of the family, and agonized over hair, pimples, and carpools to school.

Nothing I say here will keep you from those agonies and doubts, but perhaps you can just hang on to what I tell you and know that you survive – and survive quite well. It wouldn’t be fair to avoid the pain of adolescence. In many ways it prepares you for the wider world in which you will have to live out your life. But I think I can ease your heart and mind about a few things.

First, you’re right about algebra. Totally useless. Accountants, engineers, and little hand-held calculators will sort that out for you. Just pass the damn classes and move on.

Also, the infamous “permanent record” that your teachers hold over your head is a hoax. Beyond high school, no one cares a flip about it. Trust me. Stop quaking over that one.

Don’t fight Daddy about getting braces. You’ll thank your lucky stars he made you get your teeth straightened during the first two years of college. Go with it.

Pay close attention to 1968. It turns out to be a watershed year. I know you’ll be busy with school work and boyfriends and school productions, but do stick your head up every now and then to mark what’s going on. It’ll be the subject of studies and documentaries for the rest of your life.

And your current crushes? Believe me, if you could see what they look like and what they’re doing in 2009, you will be ever grateful that they broke your teenage heart during high school. I know you’ll think otherwise while you’re going through it, but, really, no great losses.

Let me assure you from the start that your 2009 self has a smart, beautiful, wonderful 26-year-old daughter. Being a mother won’t always be easy, but it’ll be fun. Wait and see. Lots of love and lots of pride.

Another assurance: you do get out of Chattanooga, Tennessee. In fact, you get out sooner than you can imagine. Once you leave for college, you never live there again, except for a couple of summers. Atlanta will be your long and lasting home, as you always knew it would be. But it won’t be the only place you live. Without going into the whys and wherefores, look forward to: Tuscaloosa, Alabama; St. Paul, Minnesota; Oxford, England; New York City. Enjoy old Chattanooga for a few more years. You won’t be there much longer.

And another thing: Don’t worry so much about what you’re going to be when you grow up. You seem to have a Midas touch where careers are concerned. You’ll flounder around a bit until your mid-20’s, when you land a perfect job for yourself at a little Atlanta television station that grows into a major network. You’ll also teach high school, write and create commercials, and wind up doing exciting mission work for the church. (And not the Baptist one.) Your jobs will take you to cool, interesting places and you'll meet wonderful people. Alas, you’ll never be rich. Can’t have everything. But enjoy your career and faith journeys, you lucky girl!

Forget the image of the future you have from the Jetsons. We are still not driving cars through space or wearing clothes as cool as Jane Jetson’s in 2009. But incredible things will be commonplace for you - computers, microwave ovens, tiny little portable phones with instant access to people and information all over the world. Really.

In 2009, you are still good friends with your childhood buddies – Sharon and Susan, Linda, Emily, and a handful of others. Modern technology lets you connect with lots of childhood neighbors and friends on a daily basis. Nurture those friendships. They only get stronger.

One constant throughout: Family is the most important thing. Our big crazy family stays close and caring. You’ll love seeing the children and grandchildren of our generation. There are losses along the way, but this family remains loving and committed to one another. It’s a gift to cherish all your life. And the crazy things that happen when we get together in 1966 will be re-told with love in 2009. 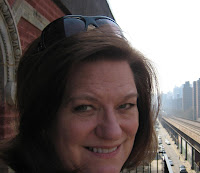 There’s a lot more to say, but I don’t want to spoil all the surprises you have in store. Yes, there are some hard, bad things, but 90% of your life is just wonderful. You love and are loved. So have faith in yourself. Be nice to people. Don’t worry about the boys and Booster Club. They mean nothing even in the short-run. Relax. Don’t be so uptight. Enjoy the ride!

Love from across the years,
Me

Email ThisBlogThis!Share to TwitterShare to FacebookShare to Pinterest
Labels: childhood 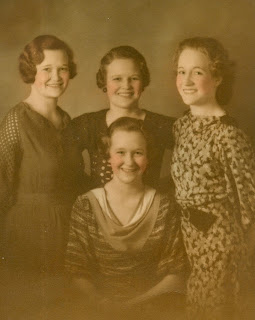 On this Mother's Day, here's to Mother and the other Sisters Bartow:

Marie, who never had any children, but could boss us around with the best of 'em and gave us money for Christmas instead of something useless.

Helen, the sweet one who once told me that eating the stings of a banana would kill me. (And they just might. Someday.) Mother of cousins Ann and Steve.

Mildred, who had a vocal preference for boy-children until her grand-daughter Amy was born. Mother of cousins Jimmy and Bobby.

Catherine, my own mother, who like to quote Bible verses that were actually Shakespeare. Mother of brothers Bill and David, sister Cindy, and moi.

We miss you all so much on this Mother's Day and know you're celebrating the day looking down with love on children, grandchildren, and great-grandchildren from above.
Posted by MaryB at 1:56 PM 5 comments: 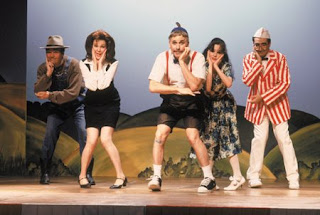 I was up 'way too late the other night watching old Twilight Zone episodes, when late night commercial fare started spewing forth during the breaks. You know the sort of stuff I mean - pole-dancing establishments, sexy phone call services, strip clubs. What caught my eye (not the pole-dancers, I assure you) was the term "Adult Entertainment" emblazoned across the TV screen.

I'm not saying that Pole-Dance City or 1-800-woo-hoo aren't entertaining. Of course they are, at least to some folks. They just don't rank as "adult" entertainment. It takes more than phone sex or a strip club to keep a grown-up entertained, children.

Go forth and find some real adult entertainment, friends!
Posted by MaryB at 7:56 AM 4 comments: 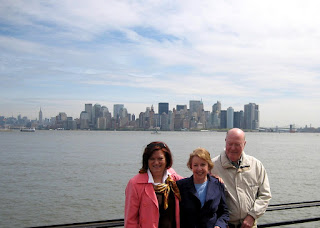 Last week was all about movement.

With friends from California visiting New York, the race to get to as many must-see sights as possible required lots of well-planned, rapid-paced moving - from Lower Manhattan, Statue of Liberty, Ellis Island, and the World Trade Center site to the Upper West Side and the American Museum of Natural History, the across to Grand Central and a peak into the Chrysler Building. Oh, and Washington Square and Greenwich Village. Sidewalks, subways, and buses - up, down, over, under, stop, go. Non-stop movement. 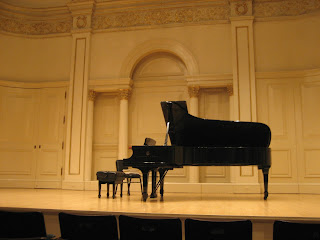 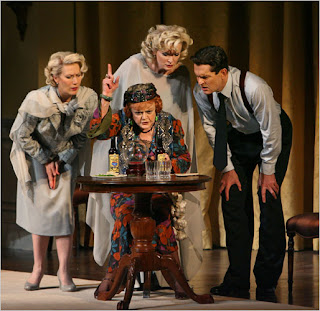 And last but not least were Angela Lansbury's movements in "Blithe Spirit." The physicality of her trance-dance was a show-stopper. It was the funniest thing I'd seen in a long time - so many little quirks and flourishes. And just when you thought she'd played it out, she'd add one more off-kilter bit. Brilliant! You knew she was scenery-chewing. And she knew that you knew she was scenery-chewing. And she gave you yo' money's worth. Well done, Angela, and the entire cast of the play. Rupert Everett, Christine Ebersole, and Jayne Atkinson - all superb!

So, yes, last week was all about movement. This week? Other than moving my office to another floor, I'll do my best to move as little as possible.
Posted by MaryB at 7:42 AM 4 comments: