In Search of: A "Real" New York Dining Experience

I'm never sure of what friends visiting from out-of- town want when they say, "Let's go to dinner! I want a real New York City dining experience." Well, hm.

See now, I think I know what they're after. Probably something out of a 1940's Thin Man movie or maybe a hip Sex and the City place, but I have to admit that after living here for 7 1/2 years (has it been that long?), I haven't found those places, either. Or, more likely, I don't travel in those circles. 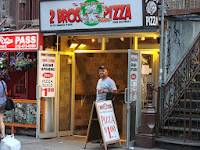 Or grab an environmentally-unfriendly container over the steam tables at a local deli and fill it up with - funnily enough - mostly Chinese food (you really have to search out a Jewish deli these days) and salads. Be mindful of "heavy" foods, because you'll pay anything from $6.99+ per pound at checkout. Live here long enough, and you'll know how to keep your container under a pound.

Or step outside, walk around the block, and see what food trucks are pulled up to a convenient curb. Hot dogs, Halal gyros and lamb platters, tacos, mac-and-cheese, and every kind of waffle/ice cream/doughnut concoction you can imagine are at your beck and call. Pretty much all of it well under $10 and most under $5.

So, yeah. Those are the real New York dining experiences. Somehow, I don't think that's what friends have in mind, though. Do they really want old-school Katz Deli, Sardi's, or the Russian Tea Room? The latest Daniel Boulud/April Bloomfield/Mario Batali venture or something in Chinatown or Little Italy? I'm at a loss.

And Atlanta, where most of the friends are coming from, is a great foodie town in its own right. I always have to think, "Can they have the same experience at an Atlanta restaurant? How is this different from a place back home?" Sigh. What comes to mind when you think "real New York dining experience" (besides expensive)? Where would you like to eat in the City That Doesn't Sleep?

And I need to know by Wednesday so I can get reservations for Friday night. Thanks!

And Now for the Good News My goodness, there seems to be a lot of bad news flying around these days. Biblical weather systems, massacres, global flare-ups, Miley Cyrus. Shit seems to be hitting the fan faster than we can wipe down the walls. All I can do is pray for those affected. No small thing, prayer, but it's hard to keep up with all the disasters.

So I propose turning off the poo-spewing fan and following the advice of Monty Python: Always look on the bright side of life. Instead of keeping up with the news, I will over-indulge in my family and good books and celebrate: Voyager I! I mean, how 'bout that little thing crossing over into, well, who knows what? Launched in 1977 (just like "Annie Hall," "Star Wars," and "Saturday Night Fever"), this little teakettle is farther from the earth than the Sun and Pluto. Much farther. Just tickin' away into interstellar space, with its 70's technology, sending back sounds and pictures. I suggest that whenever the urge strikes to watch the news, just track Voyager I & II. More relaxing. Less violent. 'Way cooler.

Bob Newhart wins his first Emmy! How it took 50 years for this guy to win an Emmy, I'll never know. He is still screamingly funny (as demonstrated with his winning performance on Big Bang Theory) and always brings his A-game. In this age of horror and despair, I recommend a healthy dose of Bob Newhart. Watch his old TV shows. Listen to his classic recordings. You can find his great routines on YouTube. That's right. Turn off the news and turn on Bob.

Autumn! “Delicious autumn! My very soul is wedded to it, and if I were a bird I would fly about the earth seeking the successive autumns.” - George Eliot. Cooler weather. Colorful trees. Corduroy. Caramel apples. Popcorn balls. Candy corn. Fall carnivals. Halloween. Then Thanksgiving. What's not to love? Instead of watching the news, start planning your Halloween costume, make some pumpkin bread, do something creative with autumn leaves.

Yes, I realize this is the ostrich approach to current events, but I believe it's the only way to save my sanity and blood pressure. Prayers will continue, but they may become less specific and more big-picture, as I track Voyager, laugh with Bob Newhart, and kick through colorful leaves.

If life seems jolly rotten,
There's something you've forgotten
And that's to laugh and smile and dance and sing!
Posted by MaryB at 8:18 PM 4 comments:

The other night I got lost on YouTube for several hours, which is the main reason I try to avoid it. But I'd heard a snippet of one of my favorite songs from my teen years at the end of a TV show and wanted to hear the whole song. So, of course, I headed to YouTube.


The song? Chad & Jeremy's "A Summer Song" from way back in 1964. (It was a very good year for songs, by the way.) So I find it and get sucked in - not just by the memories that the song dredged up, but by the lush orchestration that included strings, brass, and some guitar pickin'. Ah, lovely, I thought.

And as always happens with my ventures into the black hole of YouTube, one song led to another and before I knew it, I'd gotten lost for three hours. I moved from Chad & Jeremy to Sergio Mendes &  Brasil 66's version of "Fool on the Hill" and the Fifth Dimension's "Up, Up, and Away" and "One Less Bell to Answer" to assorted Ray Charles, Roy Orbison, and - OK, I'll admit it - Barry Manilow. While, yes, many of these songs were ballads, many weren't. I hit ballads, dance tunes, upbeat, downbeat rock and roll, country, folk, and 60s/70s rock. And while these recordings employed plugged-in guitars, electric keyboards, and drums out the wazoo, at some point, full-on strings and brass moved in to grab me in the gut. And those strings still pull.

Now, I will admit that I don't listen to much new music. Ballads, if there are any, are smarmy and bland (and maybe ballads always are), and the upbeat stuff is all computer-generated thump-thump - perfect for club dancing, but not much for using as my background life-music. Maybe new music does employ more orchestral pieces than I give it credit for, but I'm missing it whenever I tune in.

Yeah, I do sound like an old fogey. But have we totally thrown over real live strings, brass, and woodwinds? Is it a result of computers or format-radio/satellite, something that keeps us in our own genre silos? Who knows? Or maybe I'm stuck in my own geezer-music silo.

Still, those violins really added something to the tunes. And that something seems to be missing now. A world with no strings is less rich. But, hey. "They say that all good things must end someday. Autumn leaves must fall."