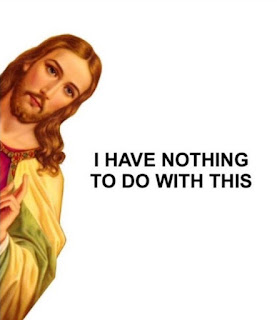 I've always wondered what Jesus might think about the Christian observance of Holy Week, especially Good Friday.
"Seriously, people. Why so much focus on the absolute worst week and day of my life?"

"I get celebrating the Resurrection, but the awful week that preceded it? Nah."

"I love what y'all do at Christmas, though, even though it's not really my birthday. (I was born in April, by the way.) The lights, the presents, cinnamon/pine/peppermint - a splendid birthday celebration, so thank you."

"Really, you can appreciate the empty tomb without making us all relive the trial, the agony, the torture."

"So go forth and bless the incoming of Spring - flowers, bunnies, Peeps, Cadbury Eggs. It's kind of a mini-birthday celebration rolled into the Resurrection story. That I enjoy. But making me relive that terrible week and day over and over and over? I'd rather not."

"And don't even get me started on Lent."

"More Christmas. Less 'Holy Week,' because it was flat-out UN-holy for me."

"Love y'all. All of y'all. Spend more time living out the Beatitudes. That's what I really want." 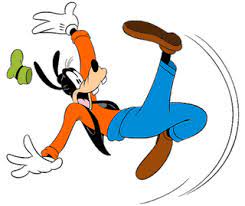 I'm a faller. I just am. I can be walking barefoot on a flat, dry surface, and I'll take a tumble. I have a history, even writing a blog post about a spectacular fall down some stairs at New York's Tabla Restaurant in 2008.

Then there was a fall in 2015 when I mis-stepped off a curb when a young couple walking a dog didn't move aside as I approached. Still have the scars from that one.

So I was due for another klutzy, fabulous trip-up, which happened the other day at work.

Leaving the Swan House to refresh my tea before taking over for a colleague's lunch break, I tripped on the sidewalk, falling forward really hard on the flat, dry surface. (See, I told you!) Tea tumbler and walkie-talkie went flying as I managed to brace the fall with my hands. Despite my arms and hands taking the brunt of the tumble, my head hit the pavement, bouncing once.

Guests approaching the house rushed to my rescue, retrieving the walkie and cup and helping me sit up. Hands chewed up and bloody from the sidewalk, small head wound, and general body-shock, it took a few minutes for me to shake it off. I notified my bosses on the walkie and assured the guests that I was fine, just a little shaken.

Security and bosses rushed to assess the damage, document my injuries, and offering to call an ambulance. Nah. I was shaken (not stirred) but felt well enough to carry on for the rest of the work day.

Two days later, I'm still sore all over and the heels of my hands are bandaged, but my hard head only has a small cut, not a swollen lump or anything that would belie the fact that I'd bounced my head of a hard pavement. The band-aid across my right temple makes me look kinda bad-ass, so I'll keep it on for a few days.

So, yes, another spectacular Elvis moment, because I can't help falling. Sigh.

I do, with God's Grace 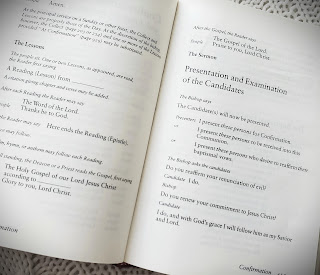 Today marks the 40th anniversary of my Confirmation. I was late to the game - just about to turn 31 - because I was raised Southern Baptist and they don't confirm. I have my own thoughts about why they don't offer the choice to stay or move on to teens and adults, but I'll keep them to myself.

Anyway, we landed on the doorstep of All Saints' Episcopal Church, Atlanta, in September 1981, shortly after a new rector, Harry Pritchett, arrived on the scene. I've often wondered if we'd stepped in and heard a sermon by anyone but Harry on that autumn day whether or not we'd have returned. And returned. And returned. But here I am. Forty years later.

Harry had the wild and crazy preaching style of a tent revival preacher, but his message was one of love. Always. Harry (and subsequently, Martha Sterne and Barbara Brown Taylor) is foundational to my Christian belief system. It was so refreshing to hear his message of love, forgiveness, justice, and mercy after years of being told repeatedly what a sinner I was. (Yeah, I get it.)

Jack and I were in Harry's first Adult Confirmation class the fall and winter of 1981-82. The class was small, maybe 10 of us, and held in the church library. Jack was Roman Catholic and already confirmed, so he would just reaffirm and be received into the Episcopal Church. But as a former Baptist, I was to be fully confirmed. Coming from a non-liturgical background, I had a lot to learn. All you clergy who want to be called "father" or "mother" can blame Harry for the way I address you for responding to my question of what should I call him. His answer? "Harry." (Anyway, y'all ain't my father or mother, so, nope, not gonna call you that.) Just Harry.

On April 4, 1982, I was confirmed by the Right Reverend Bennett Sims, bishop of Atlanta, renouncing evil, affirming my faith, and renewing the Baptismal Covenant to seek and serve Christ in all persons, strive for justice and peace among all people, and respect the dignity of every human being.

Harry, Martha, Barbara, and many dear parishioners of All Saints' have helped me live up to those vows, even when I do a lousy job of it. In the years immediately following my confirmation, we faced two major crises, homelessness and AIDS, testing those baptismal vows. Do we really want a night shelter for homeless men on our property? Yes! Can this be a safe haven for gays and those suffering from AIDS? Yes! So, I was thrown right into the deep end of the pool of how to respect the dignity of every human being as a new confirmand.

It's not always been easy to stick around. I had to learn how to deal with clergy coming and going (it's normal and healthy for them to do that, by the way). Harry eventually moved on to become Dean of St. John the Divine in New York City. Martha moved on to her own church in Maryville, TN. Barbara, of course, moved on to teach and write and become really famous. Losing them hurt. Finding out that all clergy don't preach as brilliantly or love as strongly hurt, too. But I learned to abide. There will always be glory moments and desert moments. When you've hung around as long as I have, you learn to navigate the ebb and flow.

Daugher Kate was born, baptised, confirmed, and married at All Saints'. The grands were baptised here, as well, and the whole family is active in various ways. I will be buried in the church cemetery under one of those fabulous windows. So, yeah. Forty years. Just wanted to honor the journey.