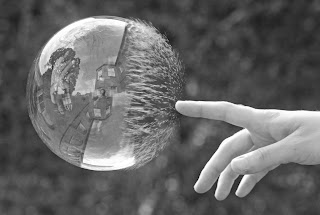 Ah, the Bubble Bursters. You know who I'm talking about - those folks you can count on to try and deflate other people's excitement, joy, and enthusiasm. One minute you're sharing a bit of hilarity or good news, then - POP! - the Bubble Burster comes along to instantly deflate the fun with mean-spirited sarcasm or a catty remark. Once in a while you may have a snappy retort to put the BB in his/her place, but more often than not, you're left feeling tainted somehow.

Nobody likes a Bubble Burster. I wonder if they ever figure out why people move away from them when they join a group or just avoid them altogether. And I also wonder why they feel the need to be a spoil-sport in the first place. A need for attention? Jealousy? What?

There's one (or two) in every crowd. At the office. At school. At church. On Facebook. They're everywhere. And everyone can tell the difference between good-hearted teasing and a negative interjection. That's what separates regular folks from the Bubble Bursters.

I have a couple of Bubble Bursters in my life right now, but I'm just paranoid enough to be ready for them when they show up. But I've witnessed other people's Bubble Bursters recently, and I am fast losing patience. What they do is petty, hurtful, and sometimes humiliating.

Wish there was a pin big enough to burst those bubble-heads. Sigh.
Posted by MaryB at 10:48 AM 1 comment:

As The Crowd Turns 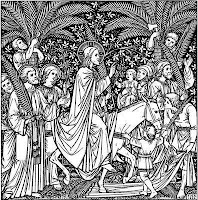 Never trust a mob of humans. That's the lesson of Palm Sunday for me. One day that crowd is spreading palms along the way shouting "Hosanna!" (Ooh, you're so smart/pretty/powerful!) and the next it's shaking fists and screaming "Crucify!" (Damn you, traitor/hypocrite/sneak!).

Mob behavior is ripe fodder for sociologists. Perfectly nice, smart, moral folks behave counter to everything they know to be right when lumped into an incendiary crowd. Think Nazi Germany. Think a rock concert gone bad. Think Shirley Jackson's "The Lottery," for goodness' sake. On the upside, think Palm Sunday. On the downside, think Good Friday. 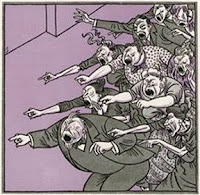 Too often churches and their messengers overlook this really important lesson in a rush to move through the Passion story, but I think they miss a real teachable, spiritual moment, especially in these highly-charged political times. Right now, we have hoards of people massed against one another screaming "Hosanna!" or "Crucify!," depending on which end of the issues they're on. Nothing good can come of it, really. It's an angry stalemate between two diametrically opposed human mobs. And we know how that turns out, if you follow it on to Good Friday.

Then there are folks like me, caught in the middle. Hoping for something to come along and pour a balm on all this manic/depressive/euphoric/homicidal mob-shouting.

The only thing to do is cover our ears and hope for Resurrection. Somewhere. Somehow.
Posted by MaryB at 10:24 AM No comments:

A Modest Proposal: Only Fall Back 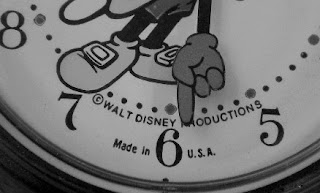 Oh, this time-shifting business! I do quite well with the "fall back" in the autumn, but putting clocks ahead in the spring knocks me for a loop for a couple of weeks. Why is that? Fooling the body out of a measly hour can't do that much damage, can it? All in me head, is it? Perhaps. But I don't know anyone who doesn't suffer from the same Spring Ahead Malady.

So here's what I propose. Let's just keep falling back. Time isn't tricked out of being what it is, anyway, so let's get creative. Yes, yes, I know. If we only turn the clocks back an hour a couple of times a year, then pretty soon everything would be topsy turvey. Day would be night; night would be day, etc. So what?

For eons (well, since humans sorted out a 60-minute/24-hour/12-month process) we've been tied to the ever-ticking clock.  Who's to say that's the only option? If we must keep track of time - and that's a big IF, since keeping track of time is driving us all to unprecedented stress levels - who says we can't manipulate it in more, um, interesting ways, hm?

Oh, c'mon. It'll be fun! Give us something interesting to do. So no more losing an hour a year, which takes us all weeks afterwards to get back to normal. Let's keep capturing an extra hour by only turning the clocks back. Psychologically, we'll think we're gaining an hour, even as the clock no longer matches the position of the sun. Be bold! Let's shake ourselves out of this awful Spring ritual.

Well, don't blame me for this crazy idea. Blame the loss of an hour. Maybe another little nap will help.
Posted by MaryB at 4:24 PM 5 comments: 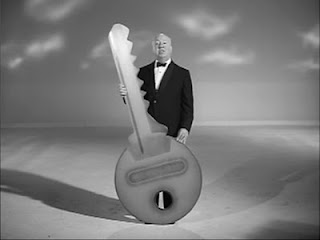 Once a week when I was a kid, a famous movie director would stop by the house for a little humorous banter, employer-insulting, and a ripping good yarn. He felt right at home in our den, and we were justifiably hospitable to this quirky, avuncular guy because he was so darn entertaining. His stories usually scared us out of our wits, but we didn't take them too seriously, as our friend made us laugh somehow over the whole frightening situation.

Thanks to Netflix and Hulu, that old friend has begun paying visits to me again. Yeah, he's been dead for years, and in this blindingly colorful world he still appears in black and white. But his black-and-white domain is often more colorful than anything the real world has to offer. Yes, it's so good to welcome my buddy Alfred Hitchcok back into my home.

I'm catching up on Season 1 of Alfred Hitchcock Presents' 25-minute episodes now that Netflix offers a way to watch them on-demand on my computer. I was probably too young in 1955-56 to be able to stay up to greet dear Alfred, and though I've seen several of the stories in re-runs on TV, many are new to me. 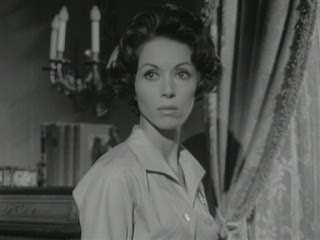 Hulu offers the later The Alfred Hitchcock Hour via computer. The first one I had to see was "An Unlocked Window," which scared me out of my wits as a teenager. One word: nurses. Anyone who's seen it will know exactly which episode I'm talking about. Oh, by the way? Still scary as all git-out, and I knew what was coming.

Watching Alfred every night got me thinking. Is there another legendary film director who has bothered to relate so thoroughly with his/her audiences? I mean, Scorsese or Tarantino go on talk shows or whatever and talk about themselves and their work, but I don't feel like I know either of them.

But Alfred Hitchcock? Why, he was like an uncle. He came into our house, brought wonderful gifts, and made us laugh. Especially when he ribbed his sponsors. Hitchcock was more than a film director, he was a buddy.

Good evening, Alfred. And now a word from our sponsor.
Posted by MaryB at 9:44 AM 2 comments: