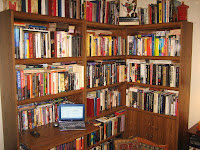 When my books are in order, my life is in order. Well. OK, that's stretching it a bit, but it certainly feels that way. After nearly a week of apartment-chaos, everything is back in its place. Mostly. But at least the books are sorted. And they are sorted (double-shelved, of course) as follows:
I did a good job of filling a couple of large bags with books I no longer want, and they'll be donated to Housing Works. I also re-discovered some old friends, which caused major distractions as I got sidetracked thumbing through books I'd forgotten about. Still, I managed to complete the job. Now I'm sitting back, enjoying my nicely organized and line-up shelves.

Yep. This is as well-ordered as my life gets. All's right with the world.
Posted by MaryB at 10:25 PM 2 comments: 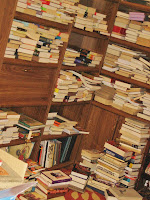 OK. Y'all knew it would take longer than 40 hours to put everything back in order after the landlords painted my apartment, didn't you? So my 40-hour Lent has extended to 120-hour Lent, as I try to organize and rearrange books, cupboards and closets that had been tipped out for the painters.

First let me say that the apartment looks lovely and fresh. The blindingly white paint used originally on the walls has been replaced with a warmer off-white. The floors and cupboard tops have been thoroughly cleaned. And it's forced me into a Spring cleaning mode, which is not a bad thing.

Organizing the cupboards and closets and rehanging pictures on the wall were no-brainers. Everything's neater and in its proper place. 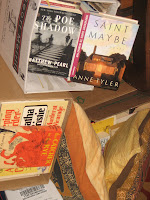 However. The books. I say that every time I move. What is it with all these books? They had been in such disarray to the point of my not being able to find a darn thing. Plus, it was becoming increasingly obvious that I needed a good book clean-out. Here is my landlord-given, God-given opportunity to sort and straighten my 2 tons of fiction, non-fiction, and trans-fiction real-time books.

So while others are giving up chocolate, taking on good works, reading and meditating during this holy time, I'm trying to decide whether The Collected Works of Eudora Welty belongs on my shelf of Southern literature or with the classics. Stay tuned.
Posted by MaryB at 10:45 AM No comments: 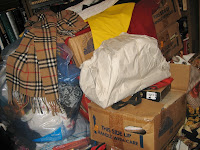 My wonderful landlords are painting my apartment this week. I've been here over five years, and it was due a re-freshing, certainly. George and Fred recommended it before Thanksgiving, hoping to take advantage of my holiday trips to Atlanta, but I just couldn't pull it together. Nor could I get myself up for it before my recent week with GrandBoy. Finally, though, I had to suck it up and get it done.

See, I couldn't work it out logistically. I live in a tiny one bedroom apartment, and while not crammed from floor to ceiling, the place is generously consumed with furniture, books, pictures on the wall, and closets filled to the gills. Now, the first proposal was to paint both the apartment rooms and the insides of the closets in one go. I finally had to tell George that there was no way I could move everything out of the closets and move all the furniture to the middle of the rooms and leave enough room for the painters to get to the walls. 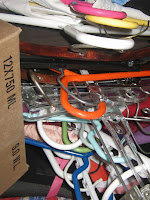 So we struck a compromise - closets on one day, rest of the walls the next. So, here I am, in the middle of the two painting days. Took me all last evening and part of this morning to clear out three closets. The good news is that the closets are nicely painted (and dry) and the shelving reinforced. Yea! But before I can do anything else, I must put everything back into the closets. And knowing me, I'll get bogged down in reorganizing them. Sigh. Then to face pulling all the books from the shelves, removing the pictures from the walls, getting the ladder and taking down all the stuff on top of the kitchen cabinets. Oh, yeah. And pushing the furniture to the middle of the rooms, as best I can. 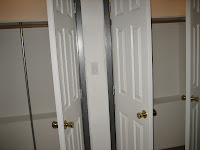 Discipline. It takes discipline, especially after a full day's work. All righty, I can do this. But, dear Lord, I figure I'm fulfilling this year's Lenten discipline in one fell swoop - a 40-hour Lent, if you will. No need for this 40 days/40 nights business. I'm in the middle of it right now - hoisting, shifting, shoving, boxing/unboxing, sweeping, finding stuff (oh! so that's where that went!), dragging, rearranging, sorting - requiring every ounce of physical and mental energy I've got.

So while the rest of you are eking out your six weeks of giving up/taking on, I'm halfway through mine. A 40-hour Lent. And once I get through this, I'll have a nice, freshly-painted apartment and all the chocolate I want.
Posted by MaryB at 6:14 PM No comments: 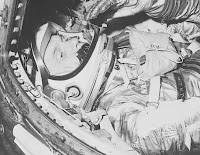 Has it really been 50 years since I was sitting in Mrs. Peters' fifth grade classroom at Henry L. Barger Elementary School, Chattanooga, Tennessee, watching as John Glenn was launched into orbit? Well, in many ways it seems like 100 years when I think of all that has happened to me and to the world since 1962. It was the best of times, it was the worst of times. I'm not going to give a history lesson here, so look it up - meaning, Google it.

The Space Race looms large in the lives of early baby boomers - the excitement, the television coverage, the striving for excellence, astronauts, new math, those pesky Russians. And maybe it's only our small slice of the generational pie that even cares about "space" anymore. Every time I watch those early space launches or the moon landings I think, wow!, how on earth did we manage to do that? What amazing resolve, talent, and courage it took to pull that off decades before personal computers, high-tech materials, and the internet.

John Glenn was the first American to orbit the earth in space. He was in a teeny tiny tin can called the Friendship 7. The whole thing still gives me goosebumps. Even after 50 years. Watch for yourself. Godspeed, John Glenn. 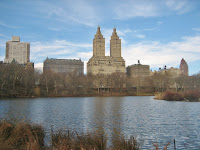 I've lived in New York City since April 2006. There's something about the place that pushes me to see, do, learn as much as I can before - at some future date - I pack it in and move back home to Atlanta. But since the first of the year, I've been steeped in all things New York more than usual.

It started when I got hooked on the Ric Burns 8-part documentary New York (thank you, Netflix/Roku) in January. I watched it straight through (well, OK, over a couple of days), picking up a lot of facts and interesting bits I'd never known before. My daily commute and weekend rambles have been greatly enhanced by what I learned. So many layers created, built, nurtured over its history by the native population, the Dutch, the English, Irish, German, Jewish, Italian, Puerto Rican, well, on it goes.

Then I read Washington Irving's A History of New York by Diedrich Knickerbocker, as recommended by the Burns series. Irving's fictional history is a funny, satirical mix-up of fact, gossip, and fable. Diedrich ("died" "rich," get it?) Knickerbocker  - not a real person - has lent his name to old-money New Yorkers, various New York sports teams, clubs, hotels, theatres, and restaurants since 1809. Irving's character is very much alive and well in the 21st century.

And last but not least, I'm coming to the end of Edward Rutherfurd's New York via audiobook. In typical Rutherfurd style (if you're familiar with Sarum, London, or any of his other Michener-type historical epics) you get hooked in by various characters and families threaded throughout New York's history. He adds flesh and blood to events that built the city and our country. A good, if long, listen, especially as I traverse the city day in and day out.

I'll give it a rest when the audiobook runs out. But the NYC documentary/literary obsession of the past two months has added to my New York living experience. New York was the very center of the revolutionary independence movement at the birth of this country. Look it up. From the early Dutch days, it was a place of commerce, money-making, new ideas. There was a work ethic, but not a Puritan work ethic, since the city wasn't founded by strait-laced religious types. (Explains a lot, eh?) Innovations in the arts, architecture, city planning, and business flourished - for good or for ill - but, by gum, anything was/is possible.

This city is much-maligned - especially during a political season - as not the "real" America. Somehow, New Yorkers are discounted as not representing the ideals and morals of the United States. Too rich? Too poor? Too ethnic? Too snobby? Too well-educated? Too capitalistic? Too socialistic? Well, I'm here to tell you, you can't get anymore American than New York City. It built and fought for the ideals of this country and nurtures them to this day. If you're interested in how I can make such an audacious statement, then I recommend watching Burns' documentary, getting to know Mr. Knickerbocker, or tracing the city's history through Rutherfurd's novel.

It is a wonderful town. And not just because the Bronx is up and the Battery's down.
Posted by MaryB at 7:47 PM No comments:

Mysteries of the Anything Drawer 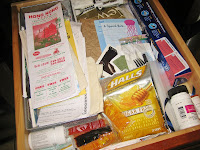 Everybody has one. An anything-drawer that serves as a repository for all sorts of odds and ends. Rubber bands, restaurant delivery menus, old pill bottles, drinking straws, thumbtacks - well, you know what I'm talking about, because you have one (or two), too.

The anything-drawer is almost always located in the kitchen. I know this because not only has it always been in every house and apartment kitchen I've habitated, but I've noticed that's where other folks have theirs, too. (I find this out while snooping through their homes - nah, just kidding. Or am I??) Wonder why that is? Oh, sure, the drawer may hold aluminum foil, sandwich bags, and those little twist-ties. But not everything in the drawer is kitchen-related. In fact, most of what's in there is a mix-up of school supplies, a medicine cabinet, old sock drawer, tool chest, and photo album.

The whole anything-vortex is a mystery. I mean, all of these drawers start out perfectly empty and bare. Yet, they don't become storage for silverware, cloth napkins, or stationery. No. Stuff just grows in there. Odd. How many little packets of soy sauce and Chinese mustard must I hoard? Why can't I throw away invitations and thank-you notes - or whatever I temporarily magnetize to my fridge - instead of sticking them in the anything-drawer? What's a normal number of restaurant take out/delivery menus? 8? 14? 274?

Oh, don't look so smug. You know you have an anything-drawer, too. Just curious, though. How many little packets of soy sauce do you have in yours?
Posted by MaryB at 4:46 PM 2 comments:

Where Your Heart Leads 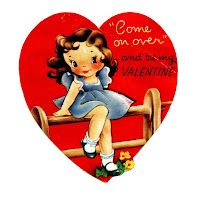 Ah, St. Valentine's Day. Love , it or loathe it, the fact remains that it is upon us once again. On the upside, there's lots of chocolate, little candy hearts with snappy phrases like "Be Mine," and Toy Story valentines. On the downside, well, see above.

Well, wherever your heart leads, this Valentine's Day thing will be over soon. After all, we have Lent to look forward to.