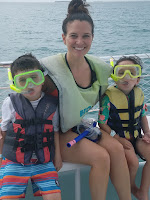 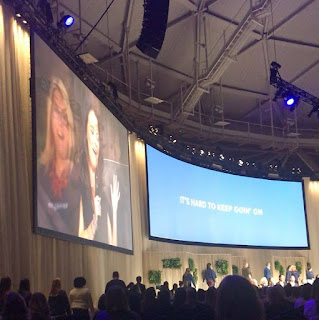 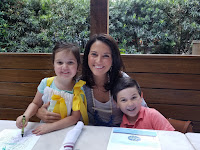 Appreciation? Not a Strong Enough Word for a Great Teacher.

It's Teacher Appreciation Day. If Facebook says it's so, it must be so. Having been taught by the best (and a few of the worst) and having headed up a high school classroom of my own, "appreciation" seems a pretty tame word for the glory, laud, and honor (and money) we owe teachers.

Let's get this out of the way first. Yes, there are crappy, mean, awful teachers, though I venture to guess there are far fewer of these than, say, the same crappy/mean/awful folks in politics, business, religion, and internet provider-world. Dedicated, knowledgeable, caring, passionate teachers far out-number the bad ones. And yes, I'm talking about public school teachers. They are, on the whole, amazing.

So on this Teacher Praise To High Heaven Day, I offer two personal reflections. One about the teacher who most influenced my life, and one about recent contact with a former student of mine.

She was young. She was pretty. She was smart. Sixth grade can be hard because all sorts of stuff is happening to you physically and emotionally. And 1962-63? The space race. Integration and civil rights. Cuban Missile Crisis. Kennedy vs Khrushchev were our headlines. Monster Mash, Sherry, and Surfin' Safari led Dick Clark's Top 10.

We were on the brink personally, nationally, and internationally. The perfect time for a teacher who demanded excellence, who asked questions about what we thought we knew and what we might need to explore further before being so all-fired sure about the answers, and who put up with our budding adolescent nonsense. She was 29 years old, and we helped celebrate her #30 in April 1963. That was our teacher, Marilyn Rushlow. Appreciation? Way bigger than that. 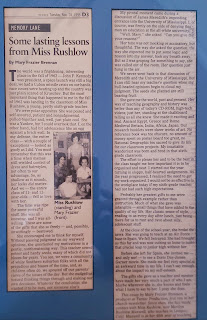 In the mid-90's I set out to find her. I wanted to reconnect to let her know what a force she'd been in my life. This was before the internet people-finding capabilities we have now, though I did employ The Chattanooga Public Library and CD-ROMs of old newspapers. (Obituaries are a goldmine of information, by the way). It was a process, but I did find her in Lompoc, California, where she was still teaching.

From that point on we stayed connected. I visited her in California. She and husband Dewey visited me in Atlanta and New York. I called her about every three months or so. There's so much more I can reflect on about her, but my heart is still too full.

Late last year a former student of mine from Chattahoochee High School reached out to me via email. I'd taught Advanced Placement Government & Politics, US + International, and Lauren had been one of my students. Back in the early 2000's, we'd worked a lot on political and personal efficacy (sometimes I'm really low on both) and staying engaged in the system, even when you disagreed or things looked bleak.

Lauren reconnected with me because she believed that those lessons from almost 20 years ago had prepared her for this moment in time.

We were finally able to meet face-to-face last week. It's a new kind of relationship now. Much as I discovered with Marilyn, it's not teacher-student but adult-to-adult, and very gratifying. I'm happy to report Lauren has grown and traveled and put her writing ad marketing abilities to good use. She's also a hands-on political activist, working to ensure the future for her generation and those after her will be safer, cleaner, more civil. And "appreciation" for her reaching out, for putting her AP knowledge to work? How about "pride" and "hopeful," from me? It's one of the many pay-offs of teaching.

Which teachers changed your life? Which influenced the way you write a sentence, understand history, put science to work every day? I suspect "appreciation" doesn't even begin to cover it.