Servant of the People: Fiction to Fact 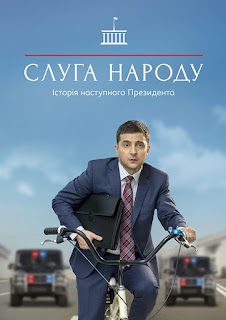 The Ukrainian television series, Servant of the People (2015 to 2019), is currently airing on Netflix. It stars and was produced by Volodymyr Zelenskyy - yes, actual President of Ukraine -and follows a high school history teacher who, thanks to a rant about government corruption caught on video by one of his students and uploaded to YouTube with 8 million views, becomes the unlikely president of . . .  you guessed it . . . Ukraine.

I can't turn away from it. Yes, it's subtitled, but you get used to that quickly.

The storyline is poignant and hopeful and funny and way too true. Every corrupt thing Ukraine faces - selfish politicians who enrich themselves and their cronies, gotcha' media hounds, crazy families, global entanglements - every government faces. Yep, there's even a defeated president who refuses to leave his office. Very prescient (remember, this was 2015).

And whenever this TV president needs to get the attention of fighting parliament members or citizen hordes, he shouts: "Putin has resigned!" stopping people in their tracks. ("Not really" he apologizes, once he has their attention.) I guess the real President Zelenskyy feels that more than ever now. 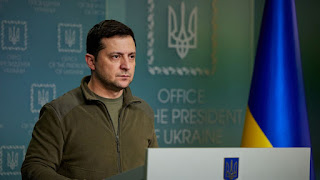 Watching Zelenskyy these last few months, fighting desperately for his country and against Putin, then watching his very political television series is mind-blowing. He is adorable (yeah, sorry, he is), he is smart, he is funny. And he loves his country.

I'm learning so much about Ukraine - a modern, beautiful country. It's also affirming to see that people and politics aren't so different the world over.

I'm dreaming of a world where we have more history teacher world leaders and fewer lawyers and business folk. It couldn't hurt.

The good people of the world are on your side, President Zelenskyy. (And thanks for Servant of the People!) 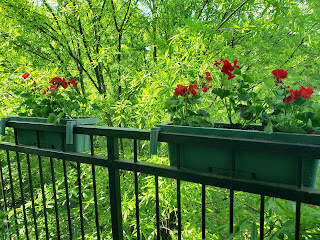 Today I planted a fresh crop of red geraniums in my balcony boxes. Just seeing the splashes of red against the green outside my windows helps me breathe better. My heartbeat eases. Shoulders relax. Stress evaporates.

Red geraniums are my favorite flowers. Always have been. Mother told me once that red geraniums were Mama's (her mother, my grandmother) favorite, too, and that I must have inherited that love from her. Well, I don't know about that, since Mama and I were never that close, but I do like the family connection.

I also planted a bunch of zinnia seeds. Zinnias were Daddy's favorite. We had this little flower garden next to our driveway at my growing-up house, and every year we'd planted lots of zinnias (he called them "old maids") and marigolds. He especially loved the zinnias, so I do this in his memory. I hope they bloom like crazy, because I love those old maids, too.

Take joy wherever you find it. Simple gifts are usually the best.