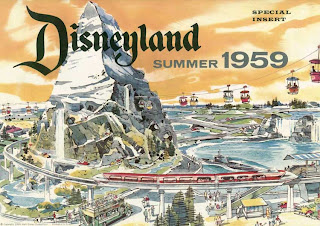 In the summer of 1959, two very brave parents loaded their four children (ages 6-14) into a station wagon and struck out from Chattanooga, Tennessee, for California and the vacation of a lifetime. Three weeks of camping out in state and national parks, soaking up the countryside, living on Spam and capping it off with a trip to Disneyland - what were they thinkin'? 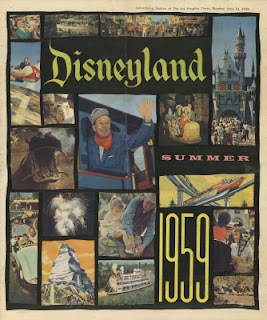 Makes me tired to think of it, but only in retrospective. As kids, it was a great adventure. No planning on our part, of course; we just fell in line and piled into and out of the car when told. Imagine the months of organizing that went into this trip! I wish I'd asked Mother and Daddy about it.

So. This year marks the 50th (50th!!) anniversary of that wild Frazier vacation to California. Tomorrow I head for California for 2 1/2 weeks, mostly for work. But I start it off with a visit to Lil Sis, who now lives in Yorba Linda, right next to Anaheim.

And on Thursday, she and I and Bro-in-law will pay a Golden Anniversary Commemorative visit to Disneyland. I haven't been there since 1959, though I've been to DisneyWorld in Florida lots of times. I do wonder how Disneyland of 2009 will stack up against the memories of an 8-year-old Tennessee girl. Will the Matterhorn seem as big? Is the bucket ride still there? Will Mr. Toad's Wild Ride still be, er, wild?

Dear Mother and Daddy: Thank you for stuffing us into that blue and white Chevy station wagon and taking us on the most incredible, memorable vacation that was ever known to four children. It was fun and educational and unforgettable. I'll even forgive the camping and the Spam.

Wonder if I can get a pair of gold Mickey ears?

Ooh, Grandma! What a big mouth you have! 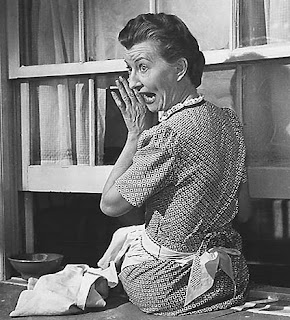 Just got the news from daughter Kate. I'm going to be a grandma! She and Greg are over the moon. Baby due end of February-March (they'll find out more when she goes for the blood test next week). Congratulations to the Mama- and Daddy-to-be!

I told Kate that I'd wait until she gave me the go-ahead to make the announcement, thinking they might want to keep it to themselves for a bit. But she said there wasn't any way she could keep that secret, so I was free to let the world know. 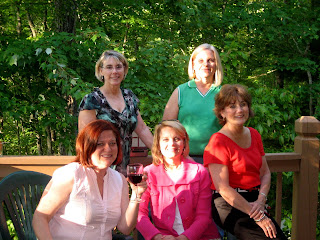 A couple of weeks ago, we had our annual Girlfriends Weekend. Last year's gathering was sort of a 6-day "weekend" in New York, so this year we headed for a more bucolic setting - Blue Ridge, Georgia. As always, it was time spent catching up, gossiping, wondering "where are they now?" - all enhanced with lots of munchies and adult beverages.

Blue Ridge offered lots of advantages (for example, a lovely big cabin with a spectacular view and a hot tub), not the least of which was that we were just up the hill from my brother's mountain home. Bro and Bill - yeah, the two Bills - greeted us with champagne and a cheese tray on Friday and treated us to a splendiferous dinner on Saturday night. As I said, Blue Ridge has it's advantages. And a good time was had by all.

The weekend coincided with my rediscovering of the TV show "The Golden Girls" of late. With the recent death of Bea Arthur, programmers have taken the opportunity to run GG marathons and add the show back to the play list, I suppose. I'd forgotten how laugh-out-loud funny the show is, by the way. Hilarious writing, plus each actress being true to her particular shtick, makes it timeless. Only the massive shoulder pad fashions nail it to the 80s-90s period. 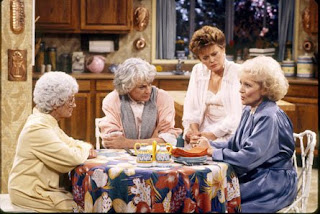 I've been trying to match up my own Golden Girls with the TV counterparts, but I haven't been very successful. OK, let's face it, I'm definitely the Dorothy Zbornak type - bossy, sarcastic - though I wish I had a touch more Blanche Devereaux sexiness and Rose Nylund sweetness. But the Girls? Hmm. I'm not sure they fit exactly. I think each of them are a combination of sweetness, sexiness, and sarcastic. Wonder which GG character my friends identify with?

Maybe it's time for a few more "stereotypes" and another go at a Golden Girls-type program. That said, don't call it The Golden Girls. And it better have some damn funny writing.

I do know this. That I love my own Girls of Gold and treasure our time together. Next year, the beach?
Posted by MaryB at 9:32 AM 6 comments: 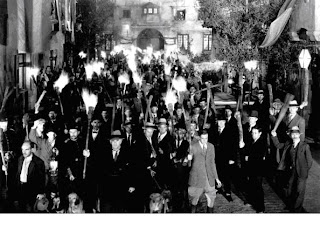 Imagine being 88 years old and so saturated with anger that you march yourself to the Holocaust Museum in Washington DC and start firing away. White hot anger. Dangerous, soul-splitting anger.

Instead of sitting on the back porch enjoying a bowl of ice cream with his grandkids or training for a community 5K run, James von Brunn preferred nurturing his white supremacist views and his deep hatred of Jews. Taking in big scoops of vileness via the internet and meetings with like-minded souls. Souls who spend every waking minute in twisted anger, blaming whole groups of people for whatever ails them. This is no Angry Young Man. This is a guy who has spent his whole life wrapped/warped in hate.

When I think of the people I love, I find they belong to all sorts of "groups." White-bread folks. Jews. African Americans. Latinos. Blonds. Yankees. Gay. Straight. Muslims. Rednecks (not the same as white supremacists). Shoot, there may even be a white supremacist in there somewhere (hope not, but I'll love 'em anyway). Why, I wouldn't give up any of them, even if something ticks me off about their particular "group" at one time or another.

People aren't groups. People aren't demographics. People are individuals. True, some are lousy -yeah, we can all name a few of them. But most folks are just wonderful, and life is richer for loving and learning from them.

If you don't like someone, move on. But don't spend your life poking around in the flames of hatred. Don't repeatedly strike a match to kerosene for 88 years, for God's sake. Turn down the heat. Go have some ice cream with somebody you do love. Get a hobby that's not built on hate. 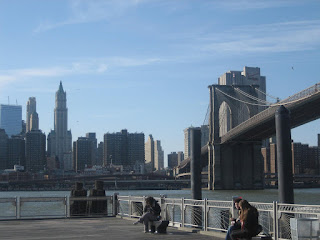 Finally. My life has a soundtrack. Having been the last creature on earth to fall into the MP3 pit, I am now the owner of a slim, spiffy hot pink iPod, thanks to Daughter and Son-in-Law. It took a couple of weeks to figure out the whole iTunes thing and how to move my music from CD to the darn thing, but I think I've got the hang of it now.

This tiny little thing holds lots of song favorites, a couple of audiobooks, and several podcasts, allowing me to shut out everyone else's iPod noise on the subway. Fine with me. But over the past few days, one playlist has risen above the others to get me to and from work - New York songs.

Any idea how many songs there are about New York City? A ba-zillion. Far and away more songs have been written about NYC than any other city on earth - nothing comes close. I'm sure I'll be downloading to the playlist from now till doomsday, but here's what I have so far: Theme from "New York, New York" - Frank Sinatra (Start spreadin' the news. I'll probably add in Liza's version as well, since it was her song in the first place.)

Lullaby of Broadway - Jerry Orbach and cast of "42nd Street" (Allentown? The hip-hooray and ballyhoo.)

Arthur's Theme - Christopher Cross (When you get caught between the moon and, well, you-know-where.)

Take the A Train - Duke Ellington (Too cool for its own good.)

On Broadway - George Benson (. . . and one thin dime won't even shine your shoes.)

Boy from New York City - Manhattan Transfer (Oooooh, weeee. You ought to come and see.)

Manhattan - Ella Fitzgerald (But I'll only take Manhattan, not the Bronx and Staten Island, too.) 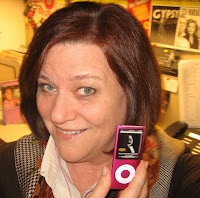 And I've just scratched the surface. Lots of my New York favorites aren't here yet. But let me tell ya', folks, nothing perks up the walking pace like "On Broadway" or "Rhapsody in Blue." And as yellow taxis whiz by and the top of the Chrysler Building comes into view, I feel like I'm in the middle of my own private 1930's movie.

I own this town, baby! Me and George, Ella, Frank, and Jerry. The Bronx is up and the Battery's down.
Posted by MaryB at 4:47 PM 4 comments: