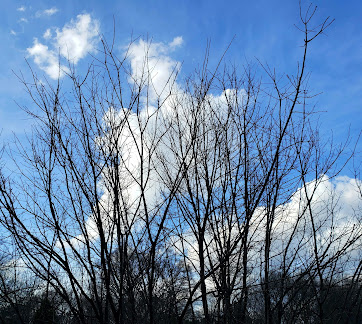 Last year during the March/April/May lock-down, my late afternoon and early evening balcony-time became my soul-saving time. I'd drag my camp chair out onto my tiny 4th floor balcony, tea or water at hand, to read or listen or just to be.

To be honest, most of my balcony-time was the just being stuff. I'd watch how the trees were leafing out. Or count the number of trains coming and going on the tree-hidden track behind the apartment. But mostly I'd let my mind go blank as I watched the breeze push the clouds around.

Today was lovely and warm - a bit cloudy at times, but fine for balcony-sitting. So I dragged my camp chair out on my tiny 4th floor balcony with a book and my tea to enjoy this last day of February Sunday afternoon.

I did a bit of reading, but I found the breeze and the tree branches and the clouds pulling me away from my book. So I decided to give in and watch the clouds roll by.

Except I've discovered that, usually, clouds don't roll by. Neither do they scud.

Nope. In the words of Joni Mitchell, I've looked at clouds from both sides now, and they mostly drift. And slide. And gather, merging with other clouds to grow and form new shapes, or pull apart to drift away from their mama-clouds. Clouds flow. And they are hypnotic.

It's noisier and louder now than it was during last year's lock-down. Cars coming and going. Lots of folks walking around, talking and laughing. The stillness and silence from last spring has given way to business as usual, the busyness of life. My clouding has a different soundtrack now.

Still, there are worse ways to spend the last day of February than enjoying a springlike breeze watching the clouds drift by.

One Night in This Wine Bar in Walton-on-Thames . . . 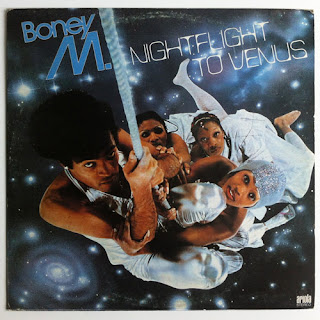 . . . in the summer of 1979, it was girls' night out to celebrate the impending wedding of my friend Sarah. Sarah and I had survived working behind the bar at the Ashley Park Hotel a couple of years before. We tended the lower pub, for the more well-off folks, not the upper pub where all the railroad workers hung out. Lots of stories about that time, but those will have to wait.

Sarah, a few of her college girlfriends, and I were partying big-time, drinking way more wine than was good for us (none of us were driving). Boney M's "Night Flight To Venus" album was spinning for the enjoyment of all, when in the course of things "Rasputin" hit the air.

As I recall, there was a small dance floor - or maybe not, maybe we just created one - and up we all jumped and danced free-spirited to that fun song. You cannot sit still during "Rasputin." Arms flung out, spinning around, jumping, being adorable (or irritating, depending on your perspective). Such a joyful memory of being young and carefree and not giving a fig about what anyone thought about our wild abandoned dancing.

The next day I got down to the local shops to get my own vinyl (yes, vinyl) "Night Flight to Venus" album, which I still have today, even though I do not own a turntable. Thank goodness for YouTube and Alexa.

Why bring this up now? Well it seems that Boney M's "Rasputin" is the latest thing on TikTok, causing a well-deserved resurgence in the song and the group. Hearing the song again made this old lady jump up, fling out her arms, spin and jump around - though I'm not nearly as adorable as I was at 28.

Boney M was never big in the U.S., so Americans missed out on this joyful stuff. I hope TikTok can introduce my fellow citizens to this Euro-group and its fun music.

Why I Don't Do Lent 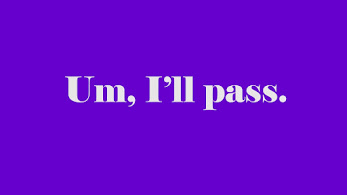 Ah, Ash Wednesday. The start of the 40-day church season that I ignore. Here's my confession: once I get my ashes, I don't do the rest of Lent.

Lent is a season of intense, purposeful self-reflection and introspection, of self-denial, of trying to make positive changes, of repentance, of prayer - all in preparation for Easter. Yeah, I tried it a few years. Read the right books and Lenten meditations (even wrote a several of those in my time), attended the right services, said the right prayers, and followed whatever guidelines and suggestions for having a meaningful Lent were offered.

But here's the thing. I already beat myself up in a hundred different ways 24/7/365. I don't need forty days to intensify the self-flagellation. Or reflection. Or introspection. I do way too much of all that already. Constantly. Very often in the wee small hours of the morning.

I read meaningful, spirit-filling books and meditations all year long. (Thank goodness for the Brene Browns, Dolly Partons, and Lin-Manuel Mirandas of the world, as well as some true-blue friends.) And prayers? Yes. Bewailing my manifold sins? Yes. Not sure I want to do more of any of that than I already do.

So Lent has never done anything for me spiritually. All that stuff is guilt-/shame-/anger-/depression-inducing for me. Even all the gazillion meditations offered fail to move me. Lent has never brought me closer to God. If anything, it just kept me in a constant state of pissed-off when I tried to follow the whole 40-day thing back in the day.

Those of you who find it spiritually meaningful, even necessary, I salute your efforts. If you think I don't understand the season or am missing the point, nah. I've seen it up, down, sideways, inside and out. I get it.

But as for me, I'll continue my year-long Lenten practices without doubling up on them for the next forty days. I guess my only Lenten discipline is ignoring the whole thing.

Achieved my second dose of the COVID vaccine last Friday. Happy to report no side effects have shown up so far. Even my shot-arm didn't give me much trouble. 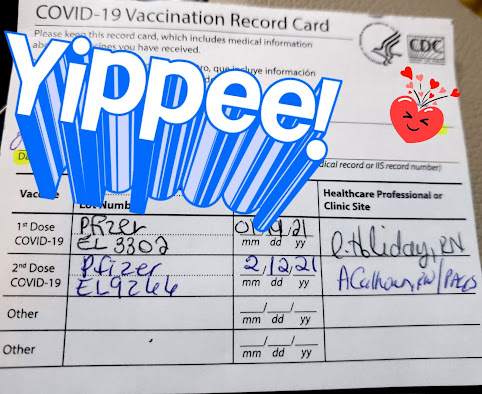 But I'm still double-masking, especially while working at the museum. I wish every public place would display a sign as clever and to-the-point as this one on a Seattle food truck: 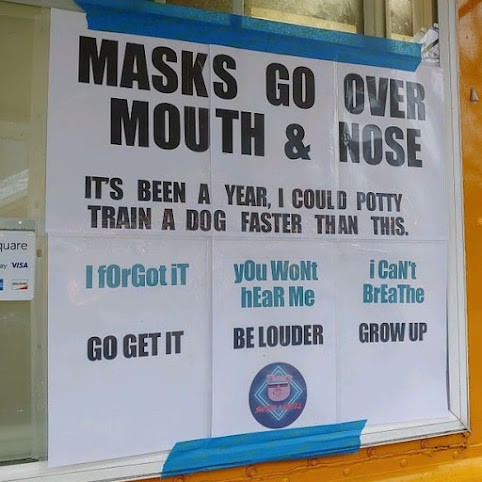