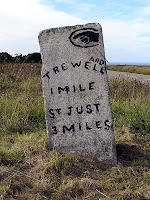 Everyone born in a year ending in 1 has a milestone birthday this year. Heading into April - my milestone month - I'm trying not to dwell on the great cosmic meaning, if there is one, of hitting 60.

Past milestone birthdays have never really bothered me. I turned 30 in England, and it was great fun. I had a fun 40th party and never thought twice about hitting the big 4-0. My 50th was relatively uneventful, but I didn't feel impacted at all by the march of time; it was just another day. But I have to admit that facing my 60th is starting to get under my skin a little. 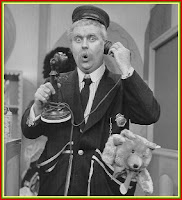 Wrapping up six decades is a big deal. Still, I contend that being a 1951 early Baby Boom child landed me in exactly the right time and place for taking advantage of all that the second half of the 20th century and beyond has had to offer. I don't remember a time before television; it was brand new when I came along, so we grew together. Sociologists and marketers realized the potential of all these new babies around the time I burst on the scene, so we early 50's babies became guinea pigs and targets for toys, toothpastes, education theories, medical breakthroughs, and political/economic movements. 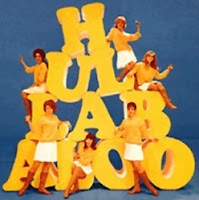 We rode - and are still riding - the crest of the wave. We've been just the right age for Howdy Doody, Captain Kangaroo, Slinky, Etch-a-Sketch, Play-Doh, Barbie (though I never had one, thank you very much), Cheerios, Look Ma no cavities Crest toothpaste, the Flintstones and the Jetsons, transistor radios, fishnets and mini-skirts, Motown, the Beatles, Shindig and Hullabaloo, Clairol hot rollers, bell bottoms, campus anti-war protests, Texas Instruments hand-held calculators, Disco (sorry), The Official Preppy Handbook, YUPPYs, minivans, 401Ks, and hyperventilation about impending (if ever) retirement.

So I reckon with all that cool stuff I got to test-drive, I don't regret hitting this milestone. I'm healthy (knock wood), gainfully employed, surrounded by a loving, crazy family and wonderful friends - what more could I want, besides knees, elbows, and shoulders that worked like they did 10 years ago? And I'll be pulling up to the milestone on a beach in Florida, enjoying the sun with my daughter, son-in-law, and GrandBoy. What better way to kick a little sand in the face of old Father Time, eh?

So to all you year-ending-in-1 babies, I say, embrace your milestone, whatever it may be. In ten years you'll look back on this one and smile.
Posted by MaryB at 11:42 AM 4 comments:

A wish for a stranger 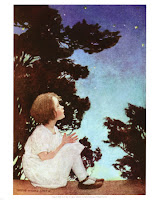 A man boarded my #6 uptown train this afternoon after work. I don't know why I happened to look up as he got on at 68th Street, but I did. The first thing I noticed was that he had a swollen, misshapen lip. He sat down on the bench across from me and looked down. I glanced at him again and saw that a dark birthmark covered most of the right side of his face. He continued looking down.

Though I was wrapped up in a story pouring from my iPod into my head, I found myself looking across the aisle at the man every once in a while. It wasn't the lip or the birthmark that kept pricking my interest; neither were ghastly horrible, just, well, I don't know. I wasn't staring at the guy, just glancing over occasionally, trying to read what was in his face. He looked, hmm, stoic. Resigned. Still, it was the end of a work day, and who looks buoyant after that, eh? Anyway, he never raised his eyes, stared at the floor the whole trip.

But for some unexplained reason, I found myself hoping he was happy.

I see all sorts and conditions of folks every day. Why this particular man touched my heart, I do not know. It wasn't pity, not at all. But there was something in the look on his face that made me wonder about him. And by the trip's end - we both got off at 116th Street - I was deeply wanting this fellow to be headed home to a big loving family (or at least a sweet old dog) who thought he hung the moon. I was wishing that he had a job he loved (or at least one that paid the bills). And I want to think that his lip and birthmark make absolutely no difference in his life, that after forty-something years, those things are just a small part of who he is.

As we got off the train, I caught his eye and smiled. He looked down and ducked out of the subway car, headed in the opposite direction from me. I'm sure he was tired. But I do hope he's happy.
Posted by MaryB at 7:37 PM 7 comments:

Fake, artistic ones, that is. There was a story on the news about this installation a couple of weeks ago, but I came upon them for the first time as I was trotting up to 59th/Fifth over lunch hour to pick up an Elegant Scribbles job. I bet they looked fabulous covered with snow last month. Though the day is rather gray, here are the snowless versions. No need to stop and smell them. 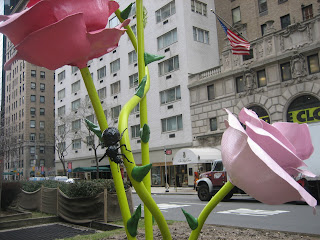 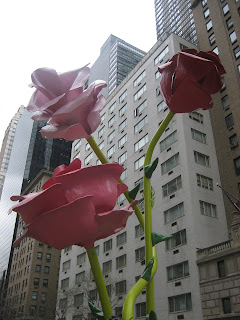 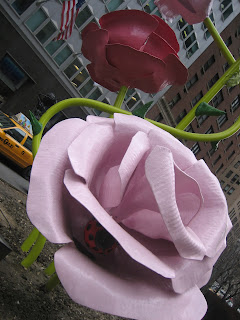 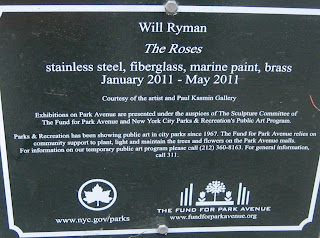 Once in a while you just have to stop and hear the roses.

I don't know about you, but day in, day out, I suffer from sensory overload. Mostly, it's a constant assault on the eyes and ears. Everything seems to be flying at me non-stop, from nonsense on a computer or television screen, to angry and/or loud junk cutting the air or bleeding through earbuds. A lot of it can't be avoided, but much of it I bring on myself just by feeling the need to stay connected, to know what's going on. I'm beginning to see the brilliance in "Ignorance is bliss."

Sometimes I have to pull off to the side of the road (figuratively speaking, of course, since I no longer own a car), regulate my breathing, and just listen. Yes, noise is one of the culprits in this overload business, but taking time to sort it out helps make it bearable for me.

Right now, for instance, what do I hear? A breeze is gently rattling my window blinds. Not an irritating sound - kind of nice, as is the breeze. A car or two swooshing by under my window. A truck's gears changing to turn the corner. A tink-tink-tink caused by who-knows-what a block or two away. Car horn in the distance. Whoa - Metro North train incoming, so that wipes out everything else. OK. It's passed. The refrigerator fan just kicked on. A different car horn even farther away. Helicopter in the distance. Mmm. Everything's pretty quiet for a New York Sunday afternoon. Except for the trains and occasional car horn (no car alarms, thank goodness), all is gentle on the ears.

It helps me squeeze out a week's worth of sensory bombardments to stop and concentrate on every little sound. Yes, some times are noisier than others, but separating out each sound - and really listening for the ones that get lost (like the refrigerator) - has the effect of hitting the reset button for me.

Add a cup of tea to that little exercise, and there you have bliss - and ignorance, I suppose. A peaceful Sunday afternoon to you all.
Posted by MaryB at 4:39 PM 1 comment:

Around the Jackie O.

It was a beautiful, breezy Saturday afternoon in New York City. Instead of sticking to my end of the park, with Harlem Meer and Conservatory Gardens, I moseyed down to my old stomping grounds in the 80's and walked around the reservoir (the Jacqueline Kennedy Onassis Reservoir, officially). Since you couldn't walk with me, I offer up this little digital camera tour. 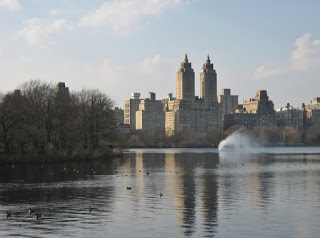 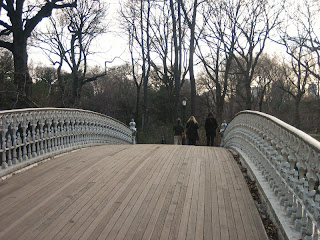 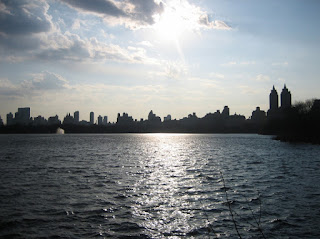 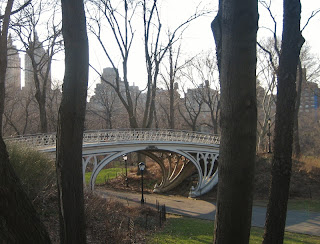 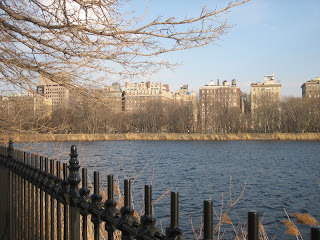 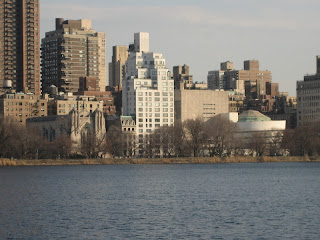 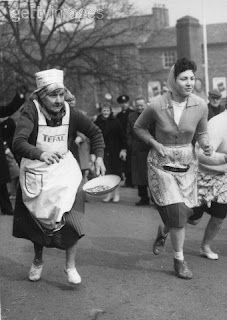 Welcome to Shrove-Gras Ash Lent week. Hang on, because it takes you from pancakes, Mardi Gras beads, and wild celebration to the depths of death and ashes, then pushes you out into a desert for forty days. A tri-polar experience, if you will. It seems kinda dangerous for even the healthiest - mentally and emotionally - among us.

Today was all about indulgence. My pancakes were slathered in butter and soaked in syrup. And yours? I had a slice of King Cake so whisky-soaked that I was breathing fire. And I mean that in a good way.

Tomorrow, everything goes very solemn. It's all about being constantly and uncomfortably reminded that, yes, you are human. You started as dust, and - guess what? - that's where you're ending up. Sounds like a marketing dream for funeral homes and crematoriums, but that doesn't seem to be the case. You never see them outside churches handing out flyers after Ash Wednesday services. Still, it is the one day of the year, other than update-your-will day, where you're confronted with your ultimate demise. Here are some ashes on your forehead to prove that you are, indeed, terminal. 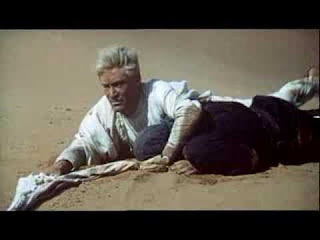 And then, the long stretch of endless heat and sand known as Lent. Ah, me. What to give up? What to take on? Can I maintain forty days of discipline (and does God really care whether I do or don't)? Well, it's enough to make you want to stay in bed and pull the covers over your head. Until Easter. What if I decide to give up Lent? Or just give up giving up?

I'm not feeling particularly desert-y Lent-y this year. Yes, I've thought of a couple of straight-jacket disciplines to squeeze myself into for six weeks, but we'll see what develops. While I think I'll survive the bi-polarity of pancakes and ashes, I'm not sure I'm ready for a tri-polar experience.

Party on for a few more hours, friends. And then get the doctor to write you a prescription for tri-polar meds. Good for six weeks.
Posted by MaryB at 7:45 PM 2 comments: 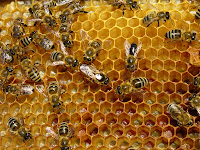 I know that many people anxiously await the brilliant dribblings of Shorty PJs, so I'm sorry for going such a long time between posts. Too many things have kept me busy over the last few weeks. Only now am I able to emerge into the light and write a little something.

Just for the record, I had nothing to do with the shootings, Middle East upheaval, and - most definitely - Charlie Sheen. I just threw those on the list for the helluvit. But the rest of the stuff has soaked up all of my time. Add in a little time to eat, a little time to sleep, and - poof! - three or four weeks are gone before you know it.

Is everyone else this busy? Well, of course you are. So you understand. Now, let me look at my To-Do List again. Where to begin?
Posted by MaryB at 12:44 PM 3 comments: