I'm a little late posting on Christmas movies (I was much earlier with the Halloween and Thanksgiving films) primarily because I've been trying to decide a clever way to organize them. There are just so many! I'm still not sure I've found the best way to do it, but it beats listing the Top Ten or whatever (Top 457, in my case).

Today, the Christmas films that impart a big life lesson. Yes, yes, theoretically most movies have some sort of life-nugget tucked inside (you reallllllly have to look for it sometimes), but these are the ones that focus on revealing some great truth. Lest you get your panties in a wad over the no-show of Scrooge or A Christmas Carol on this list - which, granted, is one of the great life-lesson stories of all time - I'm saving all the celluloid iterations of that tale for a special category all its own. Here we go: 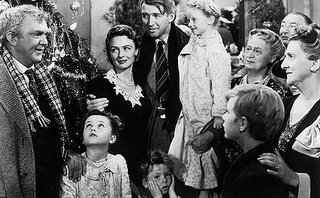 It's a Wonderful Life (1946). This one has the biggest life lesson of all, and I would argue that it wins this category across the board, not just for Christmas movies. How would life - locally and globally - be changed if you had never been born? Face it, we could all use a Clarence, the misbegotten angel, in our lives at some time or other. I never, ever fail to well up when Mr. Gower, the pharmacist, hits George and the kid is just pleading with him "I know you're hurting, but it's poison, I tell ya' . . . " Jimmy Stewart embodies both desperation and joy throughout, and Donna Reed is gorgeous. Zuzu's petals, Sam Wainwright's "Hee-Ha!", Annie's "All children should be girls," ringing bells and angel wings - filmed in beautiful black and white, thank you Frank Capra. It's iconic and scary and joyful. Jimmy Stewart just shines. 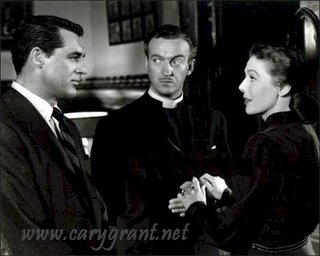 The Bishop's Wife (1947). Not so great a life lesson as IAWL, but you get Cary Grant as the angel (yum!): Don't sell out, not even for a new cathedral, and love yo' husband. Angel Dudley is charged with helping a young Bishop (David Niven) find a way to follow his soul, not just the money of a wealthy patron, and to show his wife (Loretta Young) how much she truly loves her husband. Great supporting cast includes Elsa Lanchester, Monty Woolly, and Gladys Cooper. This film's much more light-hearted than IAWL, but it seems we humans are always in need of angels to show us how to be better humans. Stick with this one - don't go near the Whitney Houston remake (The Preacher's Wife), even though Denzel Washington is a double-yum. 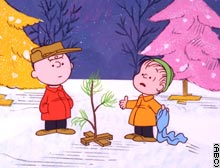 A Charlie Brown Christmas (1965). Life lesson: the true meaning of Chrismas. I know it's just a cartoon, but it has so many things going for it. Guaraldi's classic jazz score, those real little kid voices, Snoopy kissing Lucy, and - the climax - Linus' reciting the Christmas story on a bare stage. "Sure, Charlie Brown. I can tell you what Christmas is all about." (And it ain't real estate or Christmas Queens or presents to pretty girls, Lucy.) And the dancing! We like to choose one of the dancers and let loose in front of the TV - the kid who just hunches his shoulders, the girls who wave their arms over their heads, etc.

On a completely different front - when I was teaching Advanced Placement Government & Politics, our last assignment before the holidays was to watch ACBC and determine things like which character had the most political efficacy, who was Hobbesian/Lockian, which characters best fit the roles of Speaker of the House, Majority/Minority Whip, etc. The last question was: Do you think I've crossed the line separating church and state by this assignment? Believe me, after a semester of debating U.S. government, there were no wallflowers in the bunch and they were more than ready to argue both ways on the question. But all felt it was a fun, thoughtful exercise in applied learning.

Rudolf the Red-Nosed Reindeer (1964). Life lesson - Be who you are, true to yourself - no matter how different you are from the mainstream (red nose, elf dentist, misfit toy). There's a place for everyone. It's a Rankin-Bass classic, with Burl Ives as the voice of the snowman. Rudolf's iconic images were lovingly lifted for parts of Favreau's Elf a couple of years ago (with Leon Redbone as the voice of the snowman). When you consider that this was created at a time of huge change - civil rights, women's rights, social upheavals - it has a progressive message (couched in conservative trappings). Have a holly jolly Christmas, you buncha' misfits! 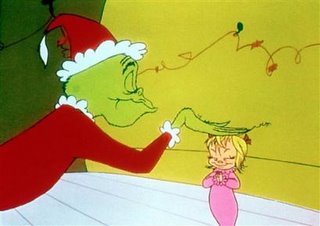 How the Grinch Stole Christmas (1966). Life lesson - You can't steal Christmas. (Bill O'Reilly needs to watch this over and over until he understands that.) And even the meanest, greenest creature's heart can grow three sizes in an instant. Also, dogs are sometimes more faithful than is good for them (dear Max). Boris Karloff's voice-over, "You're a mean one, Mr. Grinch," "Ya Hoo Dor-ray (or whatever)," and Cindy Lou Who. Aawwwww. The live action, Jim Carrey one was fine, too - loved all the gizmos and the hilarious echo scene: "I'm an idiot!" "You're an idiot!" But the original animated one is better. Celebrate with a can of Who Hash and a slab of roast beast.

What are your big life-lesson Christmas films (besides the Scrooge stuff - be patient!)?

Don't forget to keep Tom Fox and the other hostages in your thoughts and prayers.
Posted by MaryB at 6:27 AM

It's a Wonderful Life definitely deserves to be up there at no.1 and the rest nowhere (in my opinion).

Although I do have to reserve my judgement until I see if my favourite incarnation of Christmas Carol is in your list...

Awwwwww, PT, you old Scrooge. Right, you're entitled to your opinion. And technically, Charlie Brown, Rudolph and Grinch aren't movies per se - but I'll still defend their life-lesson messages.

And I'll be surprised if your favorite CC isn't on the list, since I plan to throw 'em all out on the table and argue pro or con. But I'm always on the lookout for one I don't know.

I'm eagerly awaiting part II. My very favourite xmas movies are White Christmas and The Ref, although I've never thought of them in terms of big life-lessons.

My sister and I always watch White Christmas together and sing along to "Sisters" — maybe that's where the life lesson comes in: siters looking out for each other.

If The Ref has a lesson, it's that there's no such thing as a perfect Christmas.

Isabella - hang on for White Christmas; it's in yet another Christmas movie category. (And I've already watched it this year - I do love Danny Kaye!) Have never seen The Ref - obviously something I need to track down. Thanks for the tip.

This is an interesting list. You've covered the classics, so here's my new fave this year--an animated film called "The Happy Elf". The message (I think there's two): Christmas can be found/made out of nothing, and it doesn't have to be Christmastime in order to have a generous and warm spirit. The latter can clearly be seen in the main character, who is really inspiring to kids young and old. Check it out.