"Hurled under salesmen and millionaires" 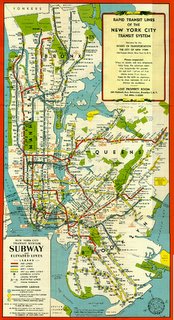 "But the subways were a part of home to me, and I loved the sense of penetration they gave me, the roaring jamming slide into the blackness of the tunnels, the knowledge you had that you were deep below other life, that there in the tunnel you were being hurled under salesmen and millionaires, great stores and glittering mansions."

My daily communte on MARTA only takes me one stop, and most of the ride is above ground, so I have more of a feeling of riding above or next to people and places. When I ride the subways in New York (or the tube in London, for that matter) I'm usually zoned out except for a vague awareness of which stop I need to look out for. But next time - next time - I hope to hold Hamill's image of sliding under salesmen and millionaires, young lovers and old farts, happy families and hopeless people. All those stories. Great image! (Or maybe I'm just horny - it is a very sexual image, now that I re-read it. Uh-oh.)

Another 2005 Book List from the New York Times. Top 10 books for the year:

Fiction:
Kafka on the Shore by Haruki Murakami
On Beauty by Zadie Smith
Prep by Curtis Sittenfeld
Saturday by Ian McEwan
Veronica by Mary Gaitskill
(Obviously the key to appearing on this list is: One (at most, Two) Word Titles!)

Non-Fiction:
The Assassins' Gate: America in Iraq by George Packer
DeKoonig: An American Master by Mark Stevens and Annalyn Swan
The Lost Painting by Jonathan Harr
Postwar: A History of Europe Since 1945 by Tony Judt
The Year of Magical Thinking by Joan Didion

To work - go hurl yourselves under a few millionaires (um-um).