New Year's reflections should only be in mirrors 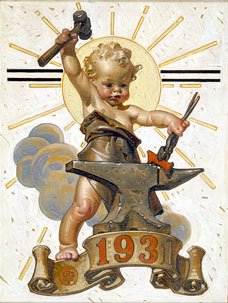 Does a concentrated effort at year-end reflection help or hurt? According to University of Virginia professor of psychology Timothy D. Wilson in today's New York Times, it's better just to move on. Group studies show that intense debriefing - whether for people in troubled relationships or 9/11 emergency workers - doesn't help the mental and emotional state of the folks in the studies and may even make things worse.

This only shores up my problems with psychotherapy. The constant "why-why-why-so how do you feel about that?" just pisses me off and makes me feel like a dog chasing its tail. My ideal therapist would be the Tracy Ullman on Allie McBeal type - someone brave enough to say "Yeah, you are crazy! Now let's move on and find a theme song for your life." Heck, give me a couple of truth-telling girlfriends and a bottle of wine, and I'm perfectly centered. (Still crazy, but perfectly centered.)

Anyway, per the article, the secret of leaving past mistakes or traumas behind? Just be the person you want to be:

Social psychologist Daniel Batson and colleagues at the University of Kansas found that participants who were given an opportunity to do a favor for another person ended up viewing themselves as kind, considerate people - unless, that is, they were asked to reflect on why they had done the favor. People in that group tended in the end to not view themselves as being especially kind.

The trick is to go out of our way to be kind to others without thinking too much about why we're doing it. As a bonus, our kindnesses will make us happier.

So instead of making a list of what went wrong in 2005 and delving deep into your psyche for the whys and wherefores, a better idea might be to list all the good things that you did or happened to you - no introspection allowed! - then burn it in the fireplace as you drink a glass of hot cocoa. After that, and without thinking twice about it, go forth and do good stuff!
Posted by MaryB at 6:48 AM

I don't really make lists of stuff that's already happened. I make lists of my goals for the upcoming year. I never not ever call them resolutions. If I look back it's usually at the major events (good or bad, doesn't matter) and what I did or did not do to bring them about - a quick spot check on how much I'm steering and how much I'm riding.

Thanks for the catch, Winston (and it has been duly changed). Guess projecting the good stuff of 2006 would be that fantasy/sci-fi stuff.:-)