Dickens in black-and-white (and I don't mean film) 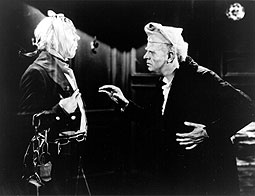 The Times (London) is running Dickens' own abridged, serialized version of A Christmas Carol in the newspaper this week, so you may want to put a lump of coal in the stove, pull your shawl around your shoulders, and settle in for a real 19th century experience.

Find Stave One here; Stave Two here; Stave Three here. You'll have to check back tomorrow to find out what happens, though.

There's also an interesting essay by Peter Ackroyd, giving the backstory for the Dickens classic. A little taste, you ask? Here ya' go:

So the story emerged from him almost ready made. His friend and biographer, John Forster, recounted with what “a strange mastery it seized him”; he recounted how he wept over it, laughed over it and then wept again. He pleaded a bad cold and refused all social engagements. In the course of its composition he took long night walks through London, sometimes covering ten or 15 miles at a time. He had finished it by the beginning of December so that, in total, it had taken a little over six weeks to compose. He had done it all in one bound, as it were, and as soon as he had written “The End” he added three double underlinings. Then he said that “he broke out like a madman”.

You may have to register for The Times. (I'm registered for everything, so I never think about it when I link to things. Sorry.) Anyway, enjoy or we'll have to ask you to die and decrease the surplus population!
Posted by MaryB at 3:12 PM