Gather 'round, whippersnappers, and I'll tell you about a few Christmas classics produced years and years before 1983's A Christmas Story. I know you're thinkin' "Was there ever a Christmas movie conceived before little Peter Billingsley said 'Fuuuuuuudddddggge' or Scottie Schwartz got his tongue stuck to that pole?" Well, yes, my children. And here are my Oldie-Goldies:

Heidi (1937). Oh, come on! You love her and you know it. Little Shirley Temple sobbing "Grandfather! Grandfather!" and singing "Silent Night" around Herr Sesemann's Christmas tree. Poor Marcia Mae Clark (Klara) - rumor has that Shirley's mom was always on guard to make sure Marcia Mae didn't upstage little Shirl, so she made life hard on the director and the poor wheelchair-bound (for most of the film, anyway) actress. Other things to recommend Sparklin' Shirley's Swiss miss tale - Arthur Treacher, the whacked-out monkey, mean Fraulein Rottenmeier, and, of course, the broken snow globe - oh, the humanity!

The Man Who Came to Dinner (1942). It's a wonder the scenery survived this one, with Bette Davis and Monty Woolly chewing their way through it. I love this film. Woolly's character is based on the infamous Alexander Woolcott, and the actor does a fine and funny job of milking the sarcasm and pomposity imbued in dialogue based on the play's Hart-Kaufman script (but they weren't the screenwriters). And you know I love me some Miss Bette. Woo! The whole cast is fabulous - Billie Burke, Ann Sheridan, Reginald Gardiner, and lovable Jimmy Durante. I can watch this one over and over. (And all of us would-be novelists can identify with the poor doctor!) 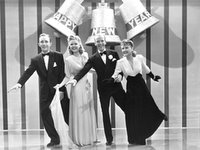 Holiday Inn (1944). This is our introduction to Irving Berlin's song "White Christmas." And Bing Crosby begins his reign as Mr. Christmas Movie. Bing is the Good Guy and Fred (Astaire) is the Bad Boy. (I think it was just the opposite in real life.) Will Bing ever get the girl? That scene where she tries to sing "White Christmas" on the movie set, and she picks up his pipe - well, kinda makes you wish real love was like that! Several of H.I.'s songs recur in the 1954's White Christmas (see below). 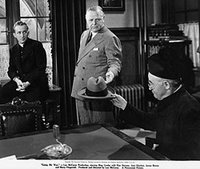 Going My Way (1944) / The Bells of St. Mary's (1945). See? I told you Bing was Mr. Christmas Movie, though these aren't Christmas movies per se - they're always shown during the holidays, though. Sort of a "Salute to 1940's Catholicism" theme. So I put these two together since Bells continues the Going story. Barry Fitzgerald is lovable and Ingrid Bergman is gorgeous, even as a nun. And lookie at the picture - why, it's our dear Gene Lockhart whom we love as Bob Cratchit in the 1938 version of A Christmas Carol! Watch these two favorites, and you'll be swingin' on a star (unless you want to grow up to be a mule). 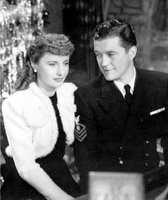 Christmas in Connecticut (1945). How yummy is Barbara Stanwyck in this film? Yeah, right, Reginald Gardiner - like you could get Barbara Stanwyck even without Dennis Morgan sniffin' around! Sydney Greenstreet is downright adorable as Stanwyck's magazine boss Alexander Yardley; so is Una O'Conner as the stereotypical Irish cook Norah. And let's rave a mo about S.Z. Sakall as Felix. He wasn't nicknamed "Cuddles" for naught (seems no one could keep from pinching those voluminous cheeks - the face kind). This is sheer screwball comedy, but that's just fine with me. And who wouldn't give their eye-teeth for that great house in Connecticut? Umm-um. 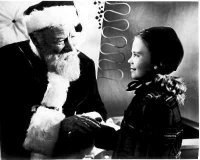 Miracle on 34th Street (1947). Another gorgeriffic actress takes over the screen in this Santa Claus-Big American Department Store tale - Maureen O'Hara. That she stands out is saying a lot, since she has to elbow perky little Natalie Wood and Edmund Gwenn outta the way. (Gwenn won Best Supporting Actor Oscar for his Kris Kringle role, by the way.) I think this version resolves itself a thousand times better than the 1994 version (though I know that my bud Nobody disagrees). To quote our dear Gene Lockhart - this time as the judge: "Eh... Since the United States government declares this man to be Santa Claus, this court will not dispute it. Case dismissed." 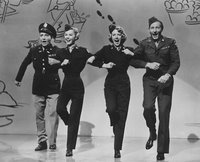 White Christmas (1954). Der Bingle, again. But even better - Danny Kaye and Rosemary Clooney. I think Bing pales in comparison to these two, but some reviewers disagree. Irving Berlin score - much of it lifted from Holiday Inn. Mary Wickes - as always - hilarious. (She's also the nurse chased by penguins in The Man Who Came to Dinner.) Kaye's "Doin' Choreography" number is classic Kaye, as is the drag "Sisters" routine with Crosby. Ooh. And Rosemary singing "Love You Didn't Do Right By Me" - what a voice! The movie's picture-perfect grand finale is iconic. Lap it up, chirrens.

Have I missed one of your golden-oldie favorites? Are there any pre-1960 British Christmas films that I don't know about? Tell me.
Posted by MaryB at 6:29 AM

Hmmm... Can't think of any Old, British films that qualify. Except for the version of Christmas Carol which you mentioned the other day.

There was one called "The Bishop's Wife" (1947) starring David Niven, Loretta Young and Cary Grant (made in the USA, but the casting makes it 2/3rds British!). But I've never seen it and only heard about it yesterday when I glimpsed a TV documentary about the Nivster.

But here's what qualifies for "Christmas Films" on this side of the pond:

A James Bond film.
From the days when the TV premiere of a big, hit movie was a big occasion, ITV always used to premiere the latest James Bond movie for Christmas Day. In years when there was no premiere available they would run one of the other Bond movies.

I put "The Bishop's Wife" under the post on Christmas Movies with a Message (though you probably ignored it, "It's a Wonderful Life"-fan that you are).

You're right - not only "Bishop's Wife," but for most of the Chrismtas movies mentioned - many of the cast members are British, so I say - hands across the water, let's honor that. And - with the exception of "It's a Wonderful Life," most stars of these movies speak with a toney American or English accent, so who can tell?