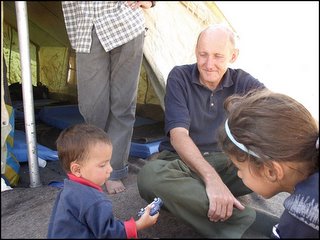 The Washington Post has a good update on the hostage situation in Iraq. As noted a couple of posts ago, the deadline has been extended to Saturday. This article focuses more on Tom Fox and his story:

Tom Fox, a Quaker, is a longtime member of the Langley Hills Friends Meeting in McLean, which organized last night's vigil. About 60 supporters gathered in the chilly air to give thanks for Fox's temporary reprieve and pray for his safe return. They read entries from his blog and listened as his e-mails from Iraq to friends and supporters were read.

His friends and family have spoken about him using carefully chosen words because they feared they might say something that could endanger his life. His daughter's appearance on al-Jazeera was an attempt to talk directly to his captives. She chose to appear on "Nightline," according to a Christian Peacemaker official, because the broadcast could be seen in the Middle East.

"My dad has always been a wanderer," Katherine Fox said in the al-Jazeera tape. "He believes that the real purpose of travel is to experience environments other than our own. When my brother and I were little, our family would visit a different city every year. . . . We got lost on purpose so that we were able to learn a new way back. . . . My father was teaching us to see opportunity in every step, planned or otherwise."

Tom Fox had prepared for the eventuality of his own kidnapping. He had given friends and co-workers a written plan to follow in case he was taken hostage. His friends and family have been following the plan since he was abducted.

The picture is courtesy AP.
Posted by MaryB at 3:00 PM