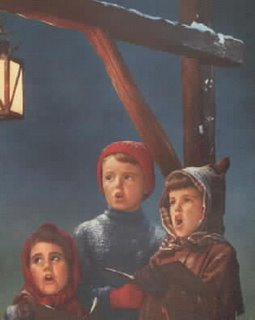 I love Christmas carols. There. I've said it. Now, under no circumstances should carols be assaulting our sensabilities before the Friday after Thanksgiving - that interferes with our "Over the River and Through the Woods/We Gather Together" humming - but after that, all bets are off.

My theory is that if commercial entities would just play great renditions of the carols instead of generic, Muzak-y stuff, folks wouldn't complain so much. Of course, piping Julie Andrews and Andre Previn or anything from the great "Winter Solstice" artists throughout the stores would probably make people stop and listen, then wander off in haze without buying anything. As it is, everyone just wants to hurry up, buy, and get the hell out before the music drives 'em crazy.

I can't think of one carol I absolutely hate - it's all in the arrangement, artist, and accompaniment - but I do have favorite lyrics that touch my soul whenever I hear or sing them. Here are some of the most beautiful to me:

"In the Bleak Midwinter," words by Christina Rosseti/music Gustav Holst (so right away, you know it's gonna be downright good):
Snow had fallen,
Snow on snow,
Snow on snow.

"O Little Town of Bethlehem," words by Phillips Brooks. I have two favorite chunks of lyrics in this one, starting with the entire third verse:

How silently, how silently
The wonderous gift is given!
So God imparts to human hearts
The blessings of his heaven.
No ear may hear his coming,
But in this world of sin,
Where meek souls will receive him,
Still the dear Christ enters in.

Where charity stands watching
And faith holds wide the door,
The dark night wakes,
The glory breaks,
And Christmas comes once more.

"It Came Upon the Midnight Clear," words by Edmund H. Sears. Verse three is a lament of a weary world that "beneath the heavenly hymn have rolled two thousand years of wrong," but oh it continues:

O hush the noise
And cease your strife
And hear the angels sing!

"I Heard the Bells on Christmas Day," words by Henry Wadsworth Longfellow. This one was written in the heat of the Civil War, which accounts for the despair of the middle verses. The message is timeless:

Then pealed the bells more loud and deep:
“God is not dead, nor doth He sleep;
The wrong shall fail, the right prevail
With peace on earth, good will to men.”

So try to ignore the awful things bombarding you this time of year. These songs really are beautiful and many, many times beautifully performed. Stop and think of the words, often penned during the bleakest of times, that - in the end - offer hope during the dark winter.

And if you want a treat, stop by Pratie Place and listen to Jane's seasonal music offerings - she's giving us the gift of a song a day, starting with "In the Bleak Midwinter." The antithesis of Muzak - beeee-yooo-tiful. Today's song is "The Holly Bears a Berry." Thanks, Jane!
Posted by MaryB at 10:41 AM

I enjoy your idea that Thanksgiving songs (you kinow, "... to grand mother's house shall go"etc.) have their proper reign (they seem to have disapeared in these parts). I have also enjoyed, when very much younger and still caroling in cold and snowy parts of the country, the peaceful images in the snow quiet. But I do not find the idea of the right prevailing at all comforting. If you have killed your enemy, you have lost. Everyone thinks they are right, anyway.

I take your point about not finding the idea of the right prevailing being a comfortable one, especially since right and wrong have been twisted to suit everyone's own perspective. But I think Longfellow, as a poet, was thinking in terms of the Big Cosmic Right (and I do believe there are Big Cosmic Rights and Wrongs)- not "life won't be worth living until we've killed all the stinkin' Rebels."

I do like the way he captures the despair of looking around and finding nothing resembling goodwill or peace. But in the end you have to hope that goodwill will find a way to win.

Ah, don't I sound like Pollyanna? So be it. It's that time of year when hope keeps rising to the top for me.