The season in stained glass 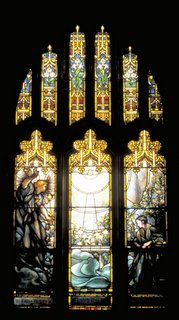 Night before last I dreamed that the lovely stained glass windows in my church - Atlanta's All Saints' Episcopal - had been knocked out and replaced with a sort of 1960s/70s-looking arrangement of colored glass chunks imbedded in white plaster. I was distraught and kept running up to people crying "Where are the windows? What have they done with the windows?" No one else seemed perturbed about it, which upset me even more.

The dream was so real that I went to mid-week Eucharist yesterday just to reassure myself that my windows were still there.

These are no ordinary windows. Seven of them are from Tiffany Studios, with a couple signed by Himself LCT. Seasons, weather, the time of day all affect how the windows filter the light, and the artisans who designed them knew full well what the results of these differences would produce. 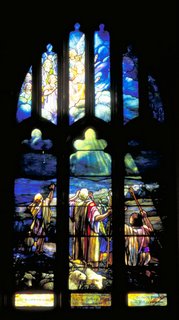 My favorite is the Shepherds' Window because of the eight angels crowded into the upper left corner (I've even written a couple of children's stories about "the angels in the window.") I check my angels every time I enter the church and turn to look at them several times during a service. They enthrall me - why? I do not know. But life would be a little darker and less glorious without them watching over me. 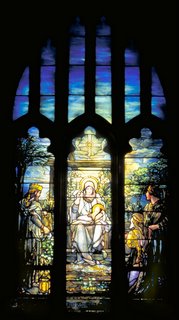 And the dream? I think I can interpret it, but it would break De-Stress Rule #10 so I'll put it aside until after the holidays.

But for now - the windows are in place and reflecting the winter light. Thanks be to God!
Posted by MaryB at 8:35 AM