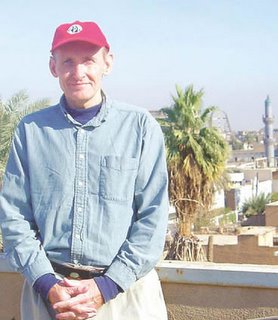 Last evening I got an email from a friend in my hometown of Chattanooga asking if I knew that the American hostage (in Iraq) Tom Fox was the same Tom Fox I sat in homeroom with for three years in high school. No, of course I didn't. Tom Fox is a fairly common name and his hometown was listed as somewhere in Virginia, so I never made the connection.

A Quaker and member of Christian Peacemaker Teams, he and three others were kidnapped a week and a half ago by the Swords of Righteousness Brigade. Tom's group was in Iraq on a peace mission, not to stir up trouble of any kind.

I have to admit I didn't know Tom very well. He was rather quiet but very nice, as I recall. I remember he was in the marching band and swing band - both of which were outstanding at Chattanooga (City) High School in the 1960s. We didn't run in the same circle, but it was a big school, so that's not unusual. My only tie with him, really, was three-years'-worth of homeroom and being forever joined together in the yearbook, since Tom's picture was always right next to mine (Fox/Frazier). Still, it hits very close to home.

From all I've read about him, he was a thoughtful, peaceful man, a good father, and an excellent musician (he served 20 years in the White House band as a clarinetist, I think). Since leaving the White House gig, he has dedicated himself to peace - learning it, teaching it, writing it, practicing it. Anything else anyone in the Class of 1969 has done seems to pale in comparison.

There is a deadline for these hostages. Their captors have given a Thursday (December 8 - tomorrow) deadline for releasing Iraqi prisoners and detainee or the hostages will be killed. Please remember Tom and the others in your prayers - if you're not into prayer, hold them kindly in your thoughts. They are there in peace. To quote Tom before he ventured to Iraq:

Here's to the quiet musician in hornrims from City High's class of 1969. May the peace of the Lord be always with you.
Posted by MaryB at 6:31 AM

Yikes, and you do bring it closer to home. As a pacifist myself, I marked the kidnap but let it lose priority along with everything else in Iraq. A clarinet player, who made it to the President's own band. Amazing. Did you know the government spends more money on military bands then all the other arts combined! A vast employer of musicians, particularly clarinetists. I will include him in my thoughts for every man, woman and child in that poor spot on the earth called Iraq.

I did not know the stat re: military bands vs. other arts. No surprise, though. One article I read about Tom said that he'd told someone that Clinton used to hang out and talk with the band a lot, but that Reagan and the Bushes rarely did. Another no surprise. Thanks for your thoughts -

I'll keep Tom and everyone who loves him in my prayers.