Christmas Movies, Part II: Marley was dead, to begin with

All right, you buncha Scrooges. It's your day in the sun, or the big curtained bed, as it were. Settle back - this is going to be a long one.

Can you think of any single tale that's been told and re-told through movies and television more than Dickens' A Christmas Carol? Not even Pride and Prejudice - which seems to produce a new version every few years - can compete. Why, every sit-com and soap opera has done its Scrooge wa-hoo, and some have done two or three.

Everyone has their favorite version. I'm hard pressed to choose just one. I think each is a reflection of its time (as are all artforms), and that's what makes each interesting. A couple of pre-1938 offerings were produced, but I've never seen them, so they're not on my list. (If you've seen them, by all means throw in your two-cents' worth.) Here goes: 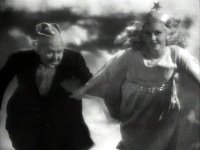 A Christmas Carol (1938), starring Reginald Owen as Scrooge. I love the soft ethereal feel of this one - very 1930's MGM. Also love Ann Rutherford as Ghost of Christmas Past and the Lockharts (Gene and Kathleen) as the Cratchits. (Look for young June Lockhart, as well - she grows up to be Timmy's mother in TV's Lassie and the mom in Lost in Space.) Owen (later Admiral Boom in Mary Poppins) is a wonderful old movie-type Scrooge. But as usual, a sappy Tiny Tim.

A Christmas Carol (1951), with Alistair Sim as Scrooge. This is probably the most famous movie version of the story, and I think it's the darkest (very post-war England). There's something weirdly appealing about Sim (his eyes, I think). Nothing especially stands out about it, except that it works, so who can argue with that. Tiny Tim not quite as sappy as all the others. Look for Hermione Baddeley (Mrs. Naugatuck on TV's Maude) as Mrs. Cratchit. 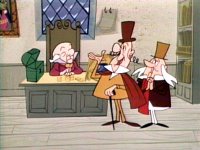 Mr. Magoo's Christmas Carol (1962), voice of Jim Backus as Scrooge. Lots of songs by Broadway's Jule Styne and Bob Merrill (Funny Girl, for goodness sake!). The animation leaves much to be desired, but I still love this one (a hold-over from childhood, I suppose). Gerald McBoing-Boing as Tiny Tim - and he says more that "boing-boing-boing."

Scrooge (1970), a musical with Albert Finney as Scrooge. A 1970's big budget musical, very Oliver-ish, with a score by Leslie Bricusse. I love this - it's sooooooo seventies, and I'm a Finney fan, so it works for me. Alec Guinness is a hoot as Jacob Marley's ghost. Great, wonderful, huge production numbers, and you know I'm a sucka' for that stuff. Another wussy Tim, though.

An American Christmas Carol (1979), with - wait for it - Henry Winkler as Scrooge. A late-1970's version of a 1930's Depression-era curmudeon. I've only seen this one a couple of times, and have only vague recollections of it.

Mickey's Christmas Carol (1983), with - who else? - Scrooge McDuck as Scrooge and Mickey Mouse as Bob Cratchit. Fond memories of watching this with Kate when she was little, so I hold it dear for that reason.

A Christmas Carol (1984), George C. Scott as Scrooge. A big favorite, because Scott strides all over, under, and through the part. Very solid. I don't remember the Tim, so he must've not affected me one way or another.

The Jetson's Christmas Carol (1985), Mr. Spacely - who'd you think? - as Scrooge. Just for fun. And Astro pulls through. 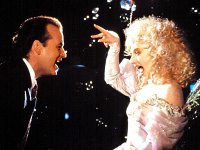 Scrooged (1988), Bill Murray as Scrooge. This is one of the movies I watch - no matter the time of year - when I need a good laugh. Very yuppie-1980s, and Murray is hilarious - but so are Carole Kane (as the violent Ghost of Christmas Present), David Johansen/Buster Poindexter (Ghost of Christmas Past), and Bobcat Goldthwait. I feel sorry for those of you who didn't get to see it in its original run - sitting in a packed theater when Murray does his funny stuff at the credits - fun, fun! 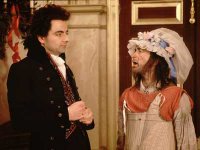 Blackadder's Christmas Carol (1988) - well, it's Blackadder and Baldrick, what more needs to be said? And you can bet that Baldrick has a cunning plan. Hard to find this one - be on the lookout in case BBC America or PBS slips it in somewhere.

The Muppet Christmas Carol (1992), Michael Caine as Scrooge. Another child- and muppet-lover-pleaser. Kermit as Bob Cratchit, with Michael Caine bearing down on him.

A Flintstone's Christmas Carol (1994), Fred, natch, as Scrooge. But Wilma's the real star of this one - her inner bitch comes through! 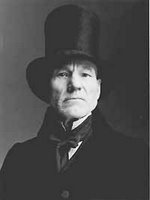 A Christmas Carol (1999), with Patrick Stewart as Scrooge. A TNT original movie and OK. I'm not overly fond of Patrick Stewart, so I prefer George C. to Mr. Star Trek Guy.

A Christmas Carol: The Musical (2004) with Kelsey Grammar as Scrooge. Threw this one in, since it's the latest iteration, but I haven't seen it. Can barely tolerate Grammar, but it looks like it has a strong cast otherwise, so I'll try to catch it next time it airs.

I don't have a favorite Scrooge (Owen/Sim/Scott/Murray, I guess), but I will throw my lot with the following:
Marley: Alec Guinness
Ghost of Christmas Past: Ann Rutherford
Ghost of Christmas Present: Edward Woodward/Carole Kane
Bob Cratchit: Gene Lockhart/Mickey Mouse

What did I leave out? Make your case for your favorite or least favorite. As an aficianado of "A Christmas Carol," I find something redeeming in each version. (But I still wonder why they change Belle's name in some of them. And Fan's.)
Posted by MaryB at 6:21 AM

Hoorah! Yes it's the Muppet's Christmas Carol all the way for me.

Becomes a touch above average for casting The Great Gonzo as Charles Dickens. A masterstroke.

My favourite was the animated "A Christmas Carol" which was the only one to win an Oscar. They still play it down here from time to time.

A masterpiece in animation and story telling.

Glad I got your favorite on the list, PT. Whew! I was sweating that one!

A-O-M - thanks for the addition to the list. Have I ever seen this one? I don't know (1971, I was smack in the middle of college so maybe it slipped by me), but I'll try to get my hands on it. I notice Alistair Sim V-O'd Scrooge - and yes, it did win an Oscar. Good one!

The George C. Scott, definitely. He just breathes a life into Scrooge nobody else, despite their competent acting, did. And he's *funny* in an appropriately dry way. It's a definitive performance.

The Tim in this one is funny too, although possibly not intentionally. "Thank you, sir!" Hee. Double hee.