Stop with the remakes, already! 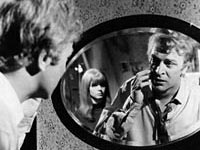 Alfie, thumbs-down
Not a week goes by that there's not some big hoopla about a forthcoming new rendition of an old film or television show.

Stop it. Now. I cannot believe that there aren't creative writers - both young and old - just popping with new fabulous ideas for movies. Do we really have to rehash Dallas (Jennifer Lopez as Sue Ellen, my friends) or Welcome Back, Kotter? Seriously. You know things are bad when classic TV shows like Bewitched, The Flintstones, and so forth are the only source of screenplay inspiration. Did ya' make 'em better than the 24-minute originals? Noooooo.

And the creative cretins in Hollywood don't stop there. Look at what they did to the completely superb 1966 film Alfie last year. Aargh! And there's talk about making a new Mary Poppins and Sound of Music. Why? Why? These are beautifully crafted films that, trust me, no one will improve upon. And did we really need to see yet one more iteration of King Kong? Just leave it to Fay Wray and move on, Peter Jackson. Stick to Hobbits.

Why not go after new stuff? OR, at the very least, look for movies that had wonderful stories but were weak in the production/performance areas? Too much work? Don't know a good story from a bad one? (Well, that's obvious.)

If you ever think about remaking To Kill a Mockingbird, Gone With The Wind, Citizen Kane, any of the iconic 70's edgy stuff - I'm comin' after ya'. And shelve the Mary Poppins/Sound of Music ideas, as well, you soul-less buncha' creatively-challenged money-worshippers!

OK, feeling better now that I got that stuff off my chest. Agree? Disagree? Don't really care, as long as you understand that I'm right about this.
Posted by MaryB at 1:12 PM

Tell me about it... sheesh. The sheer amount of idiocy is unfathomable.

Watched "A Patch of Blue" today. What a score (movie).

Agree with you 1000 per cent, Mary. Peter Sellers WAS Inspector Clouseau and there can't be another.

Others not as good as the originals:

The Flight of the Phoenix
Cheaper by the Dozen
Ocean's Eleven

Perhaps you should write a screenplay and show them how to do it!

I agree Mary. The originals stand the test of time. The remakes just don't do it for me.

Next it will probably be a remake of "It's A Wonderful Life" with Billy Crystal in the Jimmy Stewart role.

The TV-shows-turned-into-movies are my pet peeve. Miami Vice is coming out soon, Lord give me strength. Miami Vice wasn't bad enough the first time around?

What I just don't understand is the arrogance of all involved in thinking they will better a classic. Take Steve Martin (somebody, please?). Not content with making a 'disaster' movie of Bilko, what does he think he's doing now with The Pink Panther? Where does he get the idea that he can fill the shoes of the likes of Phil Silvers and Peter Sellers? When he was up-and-coming (and funny!) these men must have been his inspiration, surely?

So, remakes that were good (but not necessarily better than the original, of course):

Peter - I love A Patch of Blue. Now I need to run it again and be more aware of the score!

Chris and Jo - I hate that Steve Martin is doing some of the stuff he's doing. My theory is that his lousy movies keep a roof over his head while he's writing.

Marie - yeah, they've tried a couple of bad remakes with women in the Jimmy Stewart role. You'd think they'd've learned from that, eh?

Just heard on TV tonight that a film version of I Dream of Jeannie's in the works. Aaargh! Make it stop!

I have to largly agree!! I did to enjoy Oceans 11 and the Thomas Crown Affair.

I've not seen the Peter Jackson take on King Kong. When I heard he was doing it I was fuming as I loved the Lord of the Rings, and I could only explain this madness on a hairy foot fettish!

Rotten remakes for me were, Italian Job(why god why!!), Around the World in 80 days, Starsky & Hutch(no soul). I'd also agree with Alfie which was totally unnecessary.

I agree it does show a lack of imagination. There have been some films that really needed to be remade just to right a wrong that was done, such as in the case of Spiderman. (i know i'm probably speaking to the wrong crowd on this one)