Hangin' with the Literati 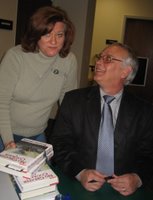 Friend Richard Croker's lecture/signing for book number two, No Greater Courage, A Novel of the Battle of Fredericksburg, took place last night and all the rich (in friends and good memories) and famous (in their dreams) turned out in force. Many of the Turner Broadcasting alums gathered to celebrate one of our own and swap catch-up stories and remember-whens. 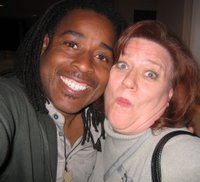 The only one of us to make it into Richard's new tome is buddy Tony "T-Bone" Marshall (shown here with Shorty). Tony shows up as a freedman who helps out the Union army before the battle. Color me jealous - Richard was supposed to throw in a "hooker" named Mary Brennan. Darn! Anyway, props to Tone. By the way, a younger Tony (and Shorty) were shown in my earlier post about Turner's SuperStation FunTime. Before his dreadlocks days.

If you're a Civil War buff or just like a good story, you'll enjoy Richard's books. I'm talking, of course, of the American Civil War as opposed to the English or Spanish (or Iraqi) ones. Congratulations, Sir Richard - we'll get your blog up and running any day now, I'm sure.
Posted by MaryB at 9:25 AM

Terry won't let me invite you over until after I've cleaned up my office. How does 2008 sound?

It was great seeing you at the deal. Thanks for coming. What fun!!!

Laptop - do you have a laptop? Bring it to Mary Mac's or The Varsity, and we can create your blog there.

Terry looked great the other night, by the way - didn't get a chance to say hey, though. Great night all round.

Clean up that office, dammit!