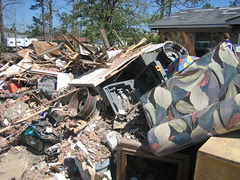 MIssissippi muck
Originally uploaded by iread2k.
Ah, the stuff of life. Though we're working on a house that has already been reclaimed, the house across the street is only just being "mucked out." Here's a shot of what was scooped out by the volunteers today. While we were working putting up sheetrock and finishing the walls of Regina and David's house, another group spent the day pulling out furnishings, wallboard, and insulation that has been sitting in watery rot for seven months. I reeeeaaallly salute those brave volunteers.
Posted by MaryB at 10:57 PM

And I salute you!

[By the way, when you return, I have tagged you ... a reward for the wonderful work you are doing ... tee hee!]

Mary, I tried to comment on the Gone Coastal blog, but "comments are restricted to Team Members."

I want you to know we are out here, following your work every day. You are all amazing!! At our little church, we've been studying the Prayer of St. Francis (page 833 in The Book of Common Prayer). I just hope I can learn to be an instrument of our Lord's peace, as you so obviously are.

May all of God's blessing and light shine on all of you.

Thank you, Tamar and Anonymous for your support. I just can't tell you what an experience it's been to see this up close and to get to know folks who went through the awfulness of this Hurricane.

And thanks, A. for letting me know that the comments were restricted! I fixed it, so comment away!