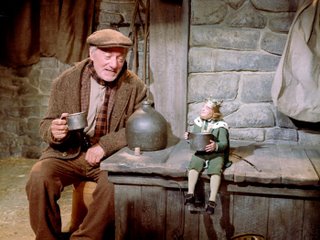 It's been a long, dry spell since one of my infamous holiday film lists (I ignore New Years and Valentine's Day), but I'm more than willing to jump on My Favorite St. Patrick's Day Movies. So without further ado (or adieu):

Darby O'Gill and the Little People (1959). The. Best. Not gonna take any arguments on this one. That banshee scared the wee outta me when I was a kid! So it's Disney - what, you wanna make somethin' of it? You get singin' and dancin' and drinkin' and little people and a young Sean Connery.

The Secret of Roan Inish (1995). Selkies and beautiful scenery and an interesting story. And not as scary as the banshee in Darby O'Gill. Written and directed by John Sayles.

The Luck of the Irish (1948). Tyrone Power is saved from a life of power and greed by his own personal leprechaun. The scenes from "Ireland" (in quotes, since we're talking "Hollywood Ireland") are tinted green. How appropriate, eh?

Ryan's Daughter (1970). Sarah Miles gets her head shaved because she's carrying on with a British soldier. John Mills - virtually unrecognizable - is the village idiot (and carried off the Oscar that year). Robert Mitchum is the long-suffering school-teacher husband of Miles. An epic by David Lean. Sort of an Irish Dr. Zhivago.

Finian's Rainbow (1968). Fred Astaire, Petula Clark, and Tommy Steele star in the screen adaptation of the Broadway classic that gave us such wonderful songs as "How Are Things in Glocca Morra?," "Look to the Rainbow," "Old Devil Moon," and "When I'm Not Near the Girl I Love." I feel sort of ho-hum about this movie - it's very 1968-ish sylistically - but I do so love the music. Oh, well. How ARE things in Glocca Morra, by the way?

Waking Ned Devine (1998). OK. It's worth it just to see the old guy ride the bicycle nekkid. Ha! And c'mon, we'd do the same thing if a friend who'd just won the big lottery dropped dead. Oh! And when the busy-body went over the cliff in the phone booth! Another ha!

OK, well I'll stop there. Of course I know I left off Going My Way/Bells of St. Mary's (see my Christmas list), The Quiet Man, Circle of Friends, and all the Leprechaun horror films, but I don't have all day, ya' know!

It's about time to start pouring the green coloring into the beer - better go now. Got a favorite you want to add?
Posted by MaryB at 2:42 PM

'Ryan's Daughter', 'Waking Ned' & 'Circle of Friends' were all great but, regretfully, I have an unfortunate aversion to films with leprechauns and other sorts of 'little people'. I must confess that this also includes 'The Wizard of Oz'.

I can't believe you forgot Leprechaun II. It was so scary, they had to bypass the theatres and send it directly to video! Oh yeah...here's a link to my favorite St. Patrick's Day movie:

Wonderful photos of Pass Christian. Good work gurl. Now that you mention it, I've got some sheetrocking that needs doing. Maybe while you're here setting up my blog we can sheetrock the garage. Whoops. Did I say "we"?