A question of forgiveness 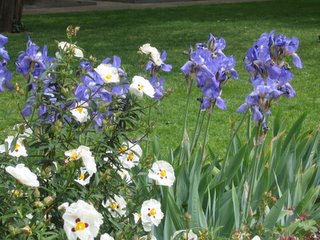 Much is being made today in the British press of Rev. Julie Nicholson's decision to give up her job as an inner city vicar because she is unable to forgive the men responsible for the death of her daughter in July's London bombings. She is broken-hearted and angry and cannot preach peace and reconciliation in light of her tragedy. Because she cannot forgive, she cannot ask others to do it.

Nicholson is a rare duck in these times. She is unwilling to live a dishonest life, whatever the consequences. C'mon. How many clergy-folk do you suspect (or know) are just standing up Sunday after Sunday mouthing the words and not believing or feeling any of it? But Nicholson was unwilling to do this. She truly believes that one must practice what one preaches, and she could not.

Several years ago I was done wrong by a couple of folks that I thought I could trust. You know the kind of thing I mean - big hobnail boot to the gut, repeatedly kicking you about the head and heart. Anyway, it took some time but I did forgive. It was a slow process, but it did happen.

Maybe Julie Nicholson is right about some things being unforgivable. Blowing up my daughter in a senseless bombing would certainly qualify in my book. If the good reverend can ever, ever find herself in a place of forgiveness, she'll drop a heavy burden, but for now she needs to carry that burden because it's the only thing she can understand at the moment. And how brave to admit that even her faith and position in the church can't supply her the strength to forgive. Giving up her parish is what she had to do. She's opting instead to work out her calling in a different way, one that doesn't require her to preach to others what she herself doesn't practice.

Other church leaders and politicians could learn a little from Julie Nicholson.

I saw this on our news earlier this evening. I admire her for giving up her 'job' in the circumstances but at the same time feel sorry that she cannot forgive.

Not that I'm saying I could forgive if anything like that happened to me.

Those are wonderful words you've written, Mary. The reverend needs all our prayers.

I know I am guilty on occasion of holding tightly to petty anger and unforgiveness: the loss of a child doesn't bear thinking about.

I had not heard Rev. Julie's story before. Thanks for sharing with us.She is a most rare and remarkable example of honesty - to self as well as others. It would be a better world if we had more like her.

Forgive and forget have become traveling partners for some reason, but they are 2 separate and distinct processes. I do not recall ever seeing a rule or admonishment from any religion or culture that said "thou shall forget".

With the real threat of these things happening again, how can you forgive? Its not like the organisations involved have said sorry or have stopped teaching evil. How can you forgive when the few people behind the evil are still practising the same things. The bombers are victims themselves, victims of deception and having their minds corrupted.