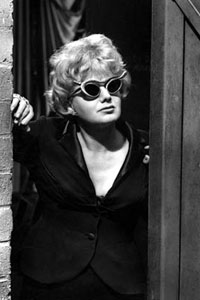 Took me a week to decide whether or not to post about the great Shelley Winters. But when I found out that Tony Franciosa died yesterday, well, I figured it was fate saying Aw, go on and give Shelley her due.

If you haven't read one of Winter's steamy memoirs, you might not know that she and Franciosa (10 or so years her junior) were married for three or four years in the late 1950s. Isn't that an interesting coincidence, the two of them dying within a few days of each other?

Winters set the bar pretty high for memoirs. She told everything. She had so much to spill that it took her two books to pour it all out. And let's face it, that's why we buy a star's autobiography - all the juicy stuff. Don't play coy with me if you expect me to plunk down hard-earned dough for your book. I want the goods, baby! Either be Jackie Kennedy-aloof and refuse to write a memoir or go the Shelley-spill-all-the-beans route. No middle-of-the-road blah-blah-blah.

In salute to Shelley, I leave you with a few classic Winters quotes:

Every now and then, when you're on stage, you hear the best sound a player can hear. It's a sound you can't get in movies or in television. It is the sound of a wonderful, deep silence that means you've hit them where they live.

I have bursts of being a lady, but it doesn't last long.

I think on-stage nudity is disgusting, shameful and damaging to all things American. But if I were 22 with a great body, it would be artistic, tasteful, patriotic and a progressive religious experience.

Whenever you want to marry someone, go have lunch with his ex-wife.

Shelley Winters' death registered with me for some reason.... though I don't really know why.

She always seemed a larger than life character so I will look out for her autobiographies.

It's funny how sometimes individuals who have become separated come back together in death. Of course we are all reunited in that state at some stage.