A movie a day starts the new year OK. Three movies (going to the movie-house movies) in three days, with a fourth planned for tomorrow - a perfect way to ring out da' old and ring in da' new. Now as soon as you read this, turn off your computer and get thee to your local cinema, because I have two outstanding recommendations.

First, Capote. The movie is a slice of Capote's life rather than a sweeping life-saga, focusing on his In Cold Blood-researching/writing years (1959-1966-ish). I guess the hardest thing about portraying Truman Capote would be to not overdo it to the point of being a caricature (though he was kinda a caricature in real life). Philip Seymour Hoffman is more than up for the challenge. Though he has some grand gestures, it's the tiny, almost imperceptible tics and habits that make you believe you're watching the real thing. And Catherine Keener as Nell Harper Lee is powerful and understated - just the way a good Southern woman, who happens to be a brilliant writer, should be.

Unlike most films today, this one takes its time - unfolding, revealing itself at a slower, more natural pace. But there ain't a dull frame in it. It's the story of a mass murder, law enforcement and the judicial system, the inner workings of a great writer, and how a book is birthed. It's about manipulation and ego and reality running smack into ambition. And, Lord, what was in the water in that little Alabama town that nurtured the literary talents of Truman Capote and Harper Lee at the same time? Where I can get me some (as we say in the South)?

The second, Good Night and Good Luck. Shot in glorious black and white (which I love, by the way), the film harks back to a time curiously (scarily) like our own. Ace CBS reporter Edward R. Murrow pushes television 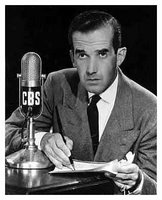 journalism to its heights, undaunted by the likes of sweaty old Joe McCarthy or network boss Bill Paley. Seems this McCarthy guy has the notion that there are Communists under every rock, especially every government and military rock, and he's going to expose them, the Constitution be damned. Hmm. And anyone who disagrees with him is labeled a Communist. Another hmmm. He's only trying to protect us. Er, hmmmmmm.

David Strathairn as Murrow just nails the performance. The solemn delivery, the ever-present cigarette, the no-nonsense mannerisms - within minutes, I forgot I wasn't watching the real guy. The rest of the cast is just as solid - George Clooney

Clooney grinds a darn good ax here - an ax that needs grinding continually in our history, it seems. Would that we had journalists today willing to face down the powers that be.

The New Yorker reviewed both films in an October article, if you're interested.

The other movie I saw was Harry Potter, the second time for me but my friend hadn't seen it and was really keen. Enjoyed it just as much as the first time I saw it. Tomorrow, The Producers - saw the original cast on Broadway, but I don't mind reliving it on film (though I'm not expecting it to be as thrilling as the live performance, natch). And I may push my movie-going stamina to the limits by going to Narnia on Tuesday evening. We'll see. I may be filmed out for a while after tomorrow. I'm already on popcorn-overload.

OK. Push yourself away from the computer, and run to the theatre!
Posted by MaryB at 8:17 PM