Back on track (and waiting for a train to hit me) 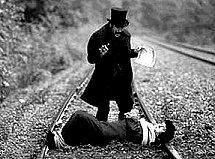 This morning I managed to shake the tinsel out of my hair and wipe the turkey and chocolate off my face, and settle back into my 5am writing regime. (The tinsel/turkey thing was metaphorical, I hope you know.) Only squeezed out a few hundred words, but I was able to pick up the ball dropped the first part of December and slowly, shakily start to run with it again. Tomorrow's writing will be better.

Hit the bookstore Saturday with your book suggestions in hand and came home with three books. Alas, current budget concerns had to be considered, so I had to avoid the lovely hardback books. (Tamar, I'll be back for Corrigan's book when I have more change in my pocket.) I'm starting with Iain Banks' The Wasp Factory, Carl Hiaasen's Basket Case, and Pablo Tusset's The Best Thing that Can Happen to a Croissant. Winston, Keillor's The Book of Guys proved hard to find - guess I'll have to go to Amazon for that - and Pete, no Robert Harris available, so that might be another Amazon purchase.

The new books will have to wait, however, because I've gotten too deep into Ursula Under, pressed upon me a couple of weeks ago by my good friend Lynne. Anybody else read this one?

It's been all movies, all weekend for me. After Capote, another round of Harry Potter, Good Night and Good Luck, and The Producers, I might need a break from film-festing for a while (though a friend wants to see Narnia tonight, so who knows?).

Last week a discussion ensued on Loose Poodle about theatre vs. home for watching films. Though I see hundreds of films on television (mainly via Turner Classic Movies), I like going to a theatre; I like the shared experience of seeing a film with a crowd of strangers and maybe one or two friends. The downside is, of course, the expense, the commercials, and annoying cell phones. However, for my recent spate of movies, I attended only the cheaper matinees and all of the audiences were well-mannered - so I doubly enjoyed the experience.

What do you think? Do you like seeing a movie in community or would you rather see it in the privacy of your own home?
Posted by MaryB at 6:45 AM

Basket Case was OK, but not our favourite Hiassen book so far. That accolade goes to either Lucky You or Native Tongue.

If you're going to get a Robert Harris from Amazon, I'd suggest Fatherland or Enigma, if I haven't already! :-)

Movie audiences are obviously better behaved here than they are over there. I must say, I enjoy seeing most films at the cinema, but I never get time to go, so I usually seem them at home out of necessity.

But, on a trip to Pasadena, CA, some time ago, to see friends, I spent many evenings at the movies, simply 'cos of some of the funky (in every sense) old movie theatres in that part of the world. It's nearly all multiplexes here now... Boo!

I have a bit of a hearing problem, so I prefer movies at home. Channel the audio through the big amp and out to the big Infinity surround speakers and punch it up to where I can hear everything. Of course, Roomie goes screaming out of the house and the neighbors emerge from their caves to see what the ruckus is all about. Plus I can pause for potty breaks when I darn well please, and my popcorn is fresher too...

Oh, thanks PT - now you tell me I shoulda opted for another Hiassen. Hey, I was confronted with a whole row of 'em and after flipping through 2 or 3, Basket Case was the first that hit me. Well, we'll see how it goes. And yes, I'm going after Fatherland for the Harris book. We're mostly multiplexes, too, by the way. I second your "Boo!" and raise you a "Hiss!"

Winston, are you saying that you can't hear movies in a theatre? Lord, one of my big complaints is that they crank 'em up 'way too loud. Honestly, I carry earplugs with me, and boy, did they come in handy during all three of the Rings movies! Yikes! Maybe theatres are quieter up Music City way - come down here and the local AMC'll blow out your eardrums.

I much prefer seeing films in a cinema. BUT....why,oh why, oh why do I nearly alway get to sit in front of people who don't pay attention and so have to constantly check with their companion what is happening OR like to take bets on what is going to happen next and discuss the options in a very loud whisper!

Having said that, a couple of times lately I've been to see films in the afternoon (Curse of the Were-Rabbit, Mrs Hendersen Presents (both highly recommended)) and I must say that it wasn't quite the same with only about 3 other people in the theatre. Like you, Maryb, I find the volume way too loud at first (you seem to eventually acclimatise to it) and am always surprised by it when the film starts.

Yeah, chm, why am I always sitting in back of people with Movie-ADD? They paid enough for the seat, you'd think the dummies would try to follow the plot. I mean if it was a 1960s French or Swedish number - yeah, I can see asking what the hell's happening. But there really no reason to do it in Wallace and Gromit (one of my favorites of the year, BTW).