All about the Benjamin 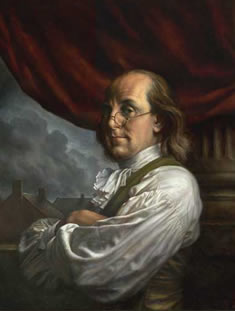 Today is Benjamin Franklin's 300th birthday. He's dead, of course, in the literal, flesh-and-blood sense, but he remains one of the coolest people in history. I searched around for a more dignified descriptor than "coolest," but - no - I think it does him honor.

The man tried everything, didn't he, including some notoriously naughty things. And yet, he never lost his reason, intelligence, or humor. Printer, inventor, scientist, writer, politician, ambassador, revolutionary, man about town/man about France.

Lord, how much can one person pack into 84 years, for goodness' sake?

So here's to you, Ben, you old dog you. Thanks for the lightning rod, bifocals, Franklin stove and odometer. Thanks for lending your big brain to the process of crafting both the Declaration of Independence and the U.S. Constitution. Thanks for saying what needed to be said with grace and humor - it all holds up today, my friend.

"Wish not so much to live long as to live well."

Benjamin Franklin did both. Happy Birthday, Big Guy!
Posted by MaryB at 6:55 AM