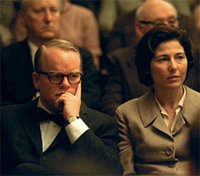 The lady from Monroeville, Alabama, is all the rage. The creator of Scout, Boo Radley, and Atticus Finch is slowly and selectively moving into the spotlight as Capote reaches prominence during the film awards season. To Kill a Mockingbird author Harper Lee, fabulously portrayed by Catherine Keener (left) in Capote, has become even more iconic (if that's possible) since the film's release.

A story in today's New York Times reports on Lee's recent appearance at a luncheon for high school essay winners at the University of Alabama. The author says she's always amazed at how young people can find new facets and interpretations of her book. From the article: 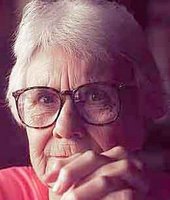 Ms. Lee is quick-witted and gregarious. At the ceremony she greeted a server at the mansion whom she remembered from luncheons past. "I went back to my friends and I told everyone that I'd met you," the young woman said. "Nobody believed me. I said, 'Oh, yeah, I did, and she is the nicest, sweetest lady." Ms. Lee looked at her with amused suspicion and started to laugh.

During lunch she reminisced about her old friend Horton Foote, who wrote the screenplay for the acclaimed 1962 film of "To Kill a Mockingbird," starring Gregory Peck. Ms. Lee spent three weeks on the set, she said, and took off when she realized everything would be fine without her.

"I think it is one of the best translations of a book to film ever made," she said. Ms. Lee attended Peck's memorial service in California three years ago. About her friend Mr. Foote, who is 89, she said, "He's become quite amazing looking in old age, like God, but clean-shaven."

Perfect book. Perfect movie. Scout Finch is one of the greatest kids in literature - so real, so confused by people's reactions to Tom or Boo, down-to-earth - nothing precious about her. If you haven't read To Kill a Mockingbird, do it now. At the very least - lose yourself in the film. Stop cruising the 'net and get thee to a library or video store. Now!

As I've asked before: what the hell was in the water in Monroeville, Alabama, to produce both Lee and Capote at the same time? Forget Lourdes. If I ever get the chance to drink the celebrated-author waters of Oxford, Mississippi, I'll be sure to stop by Monroeville for a little tipple, as well.
Posted by MaryB at 6:31 AM

One of the great things about the internet is the chance to learn things about people like Harper Lee. Like many people I read Mockingbird at school, and it's still one of my favourite books.

I've been drinking Oxford water for 5 years now. So far nothing.