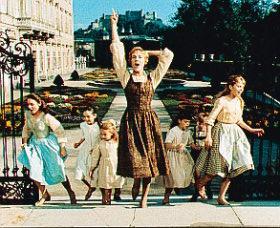 We all loved The Sound of Music because of the music and the scenery and the children and Julie Andrews. What we didn't know was that the film is a huge religious metaphor that combines the elements of the Reformation, Enlightenment, and Romanticism to produce a happy ending, with a grateful, deferential bow to the foundation of everything, Catholicism. Wow. Well, so sez Theo Hobson in The Guardian article "Hegel with Songs."

Seems Maria/Julie leaves the convent in true Luther spirit to bring God's grace (music) to the larger world. Because she leaves at the behest of and on good terms with the Mother Superior, Maria/Julie represents what Hobson calls "a faith-fantasy version of Martin Luther," since he didn't leave on such good terms. (If he'd had Maria with him, maybe he wouldn't have had to go nailing things onto doors.)

Anyway, she leaves the religious Catholic life for an economic, Protestant, secular one. The Captain supposedly represents the Enlightenment (though I think that's stretching things just a tad). From Maria, lots of "religious hope" through art, self-expression. She can even ward off bad things (thunderstorms, dog bites, bee stings, etc.) with a liturgy of "favorite things" set - of course - to music.

OK, so now we kinda lose the Luther comparison and move on to Jesus. Maria has to go back to the convent when she gets all gooey for the Captain. Sort of her three-days-in-the-grave thing, I guess. Music helps with the "resurrection" as the children bring her back by singing. (I do love that scene, though - when she comes back and the children are so happy and she's happy, ah.) At last - Protestantism, Romanticism, and Catholicism joined together to live happily ever after. Sort of.

Well, anyway that's what Hobson contends. Guess I better pop SOM in the DVD player over the weekend and draw my own conclusions. A stack of theology/philosophy books wouldn't hurt, either. Gee, and I thought it was just a nice little (OK, big) movie.
Posted by MaryB at 8:10 AM