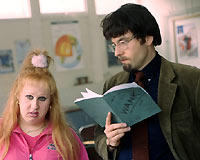 The news over here in the colonies is so damned dreary, I thought I'd turn to our Mama-land. Things are kinda dreary there, too, right now, but here are some of the more light-hearted (depending on your point of view) offerings:

The Telegraph reports that Calderdale Royal Hospital in Halifax, West Yorks, has banned cooing over the newborn babes. It infringes upon their rights (to avoid brainless twits as long as possible, I presume). Some people think that this carries things too far, but I bet the babies are grateful for a little peace and quiet, knowing they'll be constantly subjected to idiots in the outside world.

Any knitters out there? Fancy a faraway, intemperate spot to wield those knitting needles? The Guardian says that Fair Isle, 25 miles off Shetland and Britain's most remote inhabited island, has advertised for tenants for two crofts. You don't have to be able to knit, but knitters will go to the top of the application list. Gotta keep churning out those Fair Isle sweaters.

I see the age-old tradition of grave-robbing is still a popular past-time. And it's all tied into guinea-pig breeding. Hmm. Read about it here.

But if you want the skinny on the real Little Britain, tune into BBC America on Friday nights at 10:20 (though they keep switching the air times/dates, so check the listing first). David Walliams and Matt Lucas are outrageously (and oft-times delightfully, disgustingly) funny. Not for the faint-humor-hearted. My favorite character is Vickie Pollard ("No, but, yeah, but, no, but . . ."), but I have a soft spot in my heart for Daffyd ("I'm the only gay in the village"), Sebastian, and Emily Howard ("I'm a lady"), as well. The show causes a right kurfuffle. Har-har.
Posted by MaryB at 4:42 PM