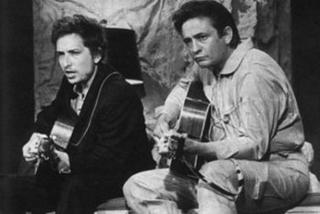 Second half of No Direction Home had a different feel to me. Still held my interest, though I didn't find it as enlightening as the first half. What tonight's segment did have was the ability to make me feel a part of what was going on - as though I were plopped down in the middle of Dylan's world of 1964-66 (with a smidgen of 1963). So in the middle of that chaos, I experienced:
How does it feel? How does it feel? Tiring, but fulfilling. I'm off to bed.
Posted by MaryB at 10:54 PM

It did have a different feel, you're right. I felt a little sad for Joan Baez, because she's clearly had to walk around now for 40 years with people thinking "...Bob Dylan" whenever they saw her face or heard her name.

It's as if she lost a limb in 1965 but could still feel it itching. Her rendition of "Love is Just a Four Letter Word" was fab, though (great fingerpicking), and I'd like to have heard more of that. Her anecdote about Dylan not remembering writing it was hilarious.

But what happened to Blonde on Blonde? No mention of the recording sessions in Nashville, no interviews with anyone who played on that one (where were the interviews with surviving members of The Band?). A sort of great big hole in the documentary, I thought.

Yeah - my assumption was that some things were sacrificed in order to put the viewer more "in the moment," as it were. Well, I'm sure it won't be the last Dylan doc. YES - loved Baez's pickin' and singin' - I marveled at the quality of her voice.