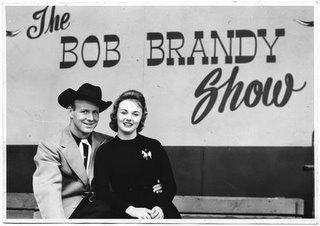 Anybody out there old enough to remember local TV kiddie shows? Just about every market - small or large - had live children's programming that ran weekdays or on Saturday mornings. They were a far cry from our SuperStation FunTime efforts back in the 1980s. Or maybe not.

We were lucky in Chattanooga, Tennessee. We had The Bob Brandy Show. It was a standard peanut-gallery sort of thing with several rows of bleachers and screaming, well-scrubbed kids anxious for a chance to wave at Grandma, eat a couple of Krystal Hamburgers (the Southern version of White Castles), and sit on Bob's horse Rebel.

Whooo-ee! Big-time stuff, I tell ya'. The television station where all this 5pm-fun took place was way up on Signal Mountain (presumably because that's the only place that would generate a television signal) and your parents or Brownie leaders had to take their lives in their hands to get you to your date with destiny. And to the Krystal Hamburgers. 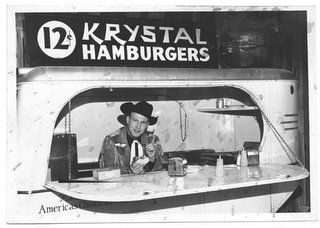 Old Bob entertained us with his guitar-playing and games and a one-in-30-or-so chance to sit on Rebel. At some point in the show, he'd go through the bleachers asking each kid's name, which sometimes turned into a "Kids Say the Darndest Things" segment.

And his wife Ingrid - well. I think she was actually from Sweden (or someplace outside the Chattanooga area, let's say) because she had a really thick accent to which our little Suth'n ears weren't attuned. That, or she had us all fooled. Anyway, her speech was slurred, which could have been the accent, or - the rumor we chose to believe at the time - she was just a sexy little lush who liked to get progressively tipsy throughout the program. Ah, Ingrid.

I think I was on The Bob Brandy Show a whoppin' 3 times, once with my Brownie troop and twice with Girl Scouts. Never got to sit on Rebel. Did get to eat Krystals. I vaguely remember getting chosen to play one of the games. Didn't get close enough to Ingrid to know whether or not she was whisky-breathed.

In addition to big Bob's show, we had a morning offering of Romper Room. "Mr. Music, are you ready, please?" "Romper Bomper Stomper Boo . . ." and the ever-popular Mr. Do-Bee (who later morphed Baby Boomer-style into Mr. Doobie). I was too old for Romper Room, but my little sister Cindy became quite the RR star with Miss Rosemary. Cindy was this cute little blond, curly-haired thing, so she became the show's standby kid in the event another little kid couldn't make it in. Yes, early stardom for her.

Ever participate on a local kid show? Spill the beans. And go ahead. Rub our noses in it if you got to sit on Rebel (or his equivalent wherever you were).
Posted by MaryB at 12:54 PM

What are spoolies and Noxema, maryb?

Good question, Liz. Worth posting about!

Sometime between 1965 and 1968 I was on the Bob Brandy Show. I hate to brag...but I won the backwards jump-rope contest. I was always an exceptionally gifted child.
Bob asked me if I wanted a loaf of Columbo bread or an autographed photo of himself, Ingrid, and the horse. I asked for the loaf of bread. Hmmm. Maybe that's why I was never asked back on the show.

The artist (at jump-rope)formerly known as Nancy Nell Alexander of Ringgold, Ga

Columbo bread? Are you sure it wasn't Colonial Bread?

Hey--I was on the Bob Brandy Show even before it was in Chattanooga. He was on with the same type of peanut gallery show back in the 50s from a station in Columbus, Ga. Guess that dates me. Some good memories. Sam

Sam - boy, you are takin' it back in time! A charter member of the Bob Brandy Show!

I never got to sit on Rebel, or be on "The Bob Brandy Show", but my family had a horse stable up in Trenton, and Rebel came to live at our stables for awhile. Bob and Ingrid were there frequently, with their daughter, to take care of Rebel or pick him up for the show. (And I never had any reason to believe that Ingrid drank - I loved her accent, and thought she was so pretty). I can remember bragging to all of the kids on the school bus, that "Rebel lives with us now, and Bob Brandy comes to our house!" ...We were the envy of the school.

@ Kristi W, it might be just as well. I'm 56 years old now, but in some ways I died at the age of seven, while sitting on Rebel in 1967, when I missed the barrel (I wasn't strong enough and didn't even come close) and about a thousand people started laughing at me.