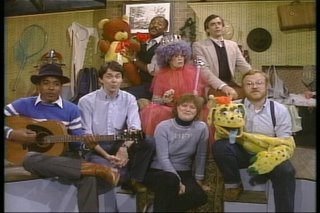 Now to the opposite of a creative Sahara.

Picture it: late 1979 - before most of you were born - Ted Turner decides he wants to do a kids' show built around cartoons, The Three Stooges, and The Little Rascals. Our assignment: to package everything in a clever way that would entertain (in a "pro-social" way) between the short features.

Thus was birthed SuperStation FunTime (Ted's title, not ours - and he wouldn't budge on it, either). Our idea was to package a variety of bits, lasting from 1:00 to 5:00, that we could mix and match depending on the length of the scheduled cartoons and shorts.

Using such outlandish characters as The Plant People and The Happy Corpuscles, we took the Bugs Bunny approach to our children's programming - silly and appropriate for children but with a wicked little wink for our adult fans. And we often got away with murder, since the scripts were rife with double entendre. Of course, it would all seem very tame today, but at the time we had quite a following - kids in Vermont, blue-collar workers (and big Stooges fans) in Iowa, and gay waiters in Atlanta. Why, there was a time when cast and crew would go for dinner after shooting/editing, and the waiters would go wild! Something for everyone, I tell ya'.

Nobody took us seriously until we had a contest. We shot a wonderful little mystery and toy maker Milton Bradley offered the prizes. Lots of prizes. So we had lots of drawings and gave away lots of Hungry-Hungry Hippos and Simons. Well, the entries poured in. At first, cast and crew did the sorting and counting, then a couple of interns came in, then the big-wigs had to hire 6 people to sort and glean market information from the cards. Thousands and thousands of cards!

Anyway, the show ran for a couple of years - with a stupid cancellation in there somewhere - and by "ran," I mean we shot new bits for about two years. TBS ended up repackaging them for another couple of years after we stopped shooting, I think.

Big thanks to the inimitable artiste JC Burns - who dragged Turner kicking and screaming into the electronic graphics age - for the photo.
Posted by MaryB at 5:00 PM

Oh my! Let's all play with our twangers!

Yes, you're singing "we wish you a merry christmas" for the 'Turner Family Holiday Gathering', a Bonnie and Terry-produced oddly-contrived melange circa 1981 or 82. Also singing later in the clip are noted vocalists Robert Wussler, Jeffrey Hewitt, and Ernie Watts.

Garth - I think we had some similar out-takes for SSFT that will never see the light of day. Ah, the things one can get away with while using puppets and dressed as plants . . .

OK, JC, the Wussler singing? Now you're just scaring me. Thanks again for the photo!

Wow! That is cool. I never saw it (that I can remember), and too bad about the name (hey, I used to work at the original WTBS... before he bought the call sign), but I am sure you made many a child happy.

Where was the original WTBS, Peter? I worked at pre-TBS (WTCG) and well remember the hoopla over the call-letter change.

Mary, Mary (you know)(anyway) WTBS= Technology Broadcasting System. It was MIT's student radio station. With the money from the sale to Ted, its power went up a good bit. It is now WMBR, for the building whose basement it is in (Walker Memorial).

"Cab Driver" (drive by Mary's place)
"What Would My Mary Say"

and the list goes as long as an arm.

Peter - I'd forgotten who Ted had to pay off for the TBS call letters. Thanks for the historical recollection on your part!

Wait! You started the "Mary" song thread before I could tell the story of my last encounter with Ted Turner - in an elevator full of people at CNN Center. He greeted me, then proceeded to sing "For it was Mary, Mary, plain as any name can be . . . " all the way up! (Where does one look at a time like that??)

I WAS ON THIS SHOW! My 15 Minutes of Fame. Sorry Kate...you weren't born yet. Thanks Aunt Mary! I remember playing the kazoo during the 4th of July Special. I was what? 6 maybe.

Oh, I SO Remember Super Station Funtime being on twice A day in the summer of '81,that, and Captain Kangaroo were two shows that made that period memorable!