The Lure of the Ice Princesses

I know you macho men out there hate it, but the big cha-ching machine of Winter Olympics is Women's Figure Skating. It's been that way ever since I can remember, and I'm pretty damned old.

So as I type the race is on. This is what we've waited to see (though Ice Dancing has been quite the unexpected contact sport so far in these Games - wow! How many cutie-pies can smack the ice in one evening, eh?). And though I have to admit that I'm not as into figure skating as I once was, I'll still watch it tonight, just to see if yet another American Ice Princess is born. Finals are Thursday, I think. 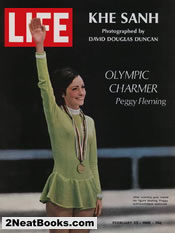 I don't remember Tenley Albright (not quite that old), but I well remember Carol Heiss, 1960 gold medal - even had a Carol Heiss coloring book. And I remember when the whole US skating team was killed in a plane crash in 1961. Tragic.

Then came Peggy Fleming for 1964 and 1968 (when she won her gold). Met Peggy Fleming once, by the way, during my Turner days. Even have a picture with her - when I dig it out, I'll post it as proof that I did, indeed, meet a gold medal winner.

There were some dry years - OK, Janet Lynn, but she didn't win the gold - then adorable Dorothy Hamill in 1976. There are women who still sport the Dorothy wedge-do. Then a long line of Kristis, Nancys, Taras, Sarahs - and of course the red-neck, knee-smacking Tonya. 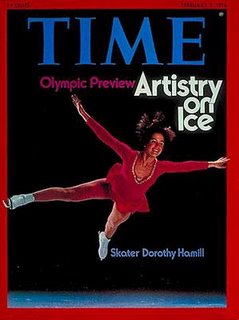 We love to watch the ladies. Doubles? Triples? Axels? Salchow? Toe loop? Camel? Sit-spin? Will they make it, or will they land on their fannies? Well, stay tuned.

Oh, and today's New York Times has a great article on why ice is slippery. No, really. And there's scientific debate about it, too. (No, really.) Read it! It's a wonder anyone can maneuver on ice at all, much less on a blade 1/8" thick.

And some people question that figure skating's a sport? Ha!
Posted by MaryB at 2:44 PM

Ice Skating? Nah! The big news in the Olympics is the curling.

I reckon our boys will beat Canada in the final. Team USA 3rd in the play-off with Finland.

Mind you - with the ice skating, you get to see the girls' panties. It's worth tuning in for that.

Oh Mary, this was a wonderful post for me. I am right there with you. I have loved...and watched ALL the figure skating events in the Olympics over the years....especially the men's and women's individual. How great to read your post and remember many of the ladies' and the moments that made the Olympics so special. Thanks for the trip.

I almost met Peggy Fleming. It was maybe late 60s or early 70s in Pittsburgh. I was hanging out in a bar in Pittsburgh with some friends when she arrived with an entourage and took the place over. Seems she was with one of those IceCapades extravaganza shows that was making a tour stop in the 'burgh. We tried to get close enough to meet her, but too many ... what, "body guards" around her. She was a dream just the same...

pt is correct about curling. In fact it's the most intellectual game in the Olympics; kind of like chess on ice. Finland scored a win today in the 10th End, but we (US) are still in the running. I hope you can find time to watch some curling. If you get lost in the game there is always a book. How about "Curling for Dummies"?