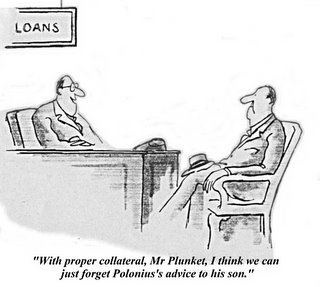 Whenever I read the book of Proverbs in the Bible - full of good stuff, by the way - I'm reminded of my dear Mother who was forever quoting proverbs of some kind. All of her words of wisdom were prefaced by things like, "As the Bible says . . . " or "It says in the Bible . . . " then she'd tack on whatever she felt the situation called for.

Now, my mother knew the Bible backwards and forwards, but she often attributed wise words of, say, Ben Franklin or Shakespeare to the Bible. It was no good correcting her. She was dead-on certain that several very famous quotations could be found in Proverbs somewhere - we just weren't looking hard enough.

Her biggest rip-off was from Polonius' advice to Laertes in Hamlet. I cannot tell you the number of times I heard, "Remember, Mary, as the Bible says - neither a borrower nor a lender be!" Or "It says in the Bible - to thine own self be true."

Well, they could have been in the Bible, and you can find passages that have similar meaning. But as many times as I've scoured Proverbs, I've never found "Neither a borrower nor a lender be" or "To thine own self be true" in those exact words. Nope. They belong to Shakespeare's Polonius, no doubt about it. (Fabulous speech, by the way - perhaps some Bible scholar should just insert the thing into Proverbs anyway. I don't think God would mind.)

I don't know if Mother really believed every wise saying could be found in the Good Book, or whether she just enjoyed a good biblical argument. And I never found out who "Sam Hill" was or why some amazing or frustrating event would elicit "Gad poor Aleck!" from her. But somewhere in Heaven she's probably standing toe to toe with Will, Ben, and God trying to prove her point.

So, off you go then - into the world with "To thine own self be true" and advice about borrowing and lending. Or how about "Pride goeth before destruction, and a haughty spirit before a fall"? Now that really is in the Bible.

Get your wisdom where you can, folks.
Posted by MaryB at 6:38 AM

Wonderful, mary. I'd love to have met your mother: she reminds me of my great-aunt. However she used to say things like, 'You can kiss my arse Tom Chalk.' Whoever he was.

But don't you just detest the 'wife of noble character' so vividly desribed in proverbs?!

I was 50 years old when I discovered that "God helps those who help themselves" was Ben Franklin's line, not the Good Book's. It was reasonable advice, regardless of the source... Aren't we lucky to have had mothers who cared enough to quote anyone to us? I miss mine, too, Mary. Thanks for your wonderful blog!