The tragedy that spurred the arts in Atlanta

In late spring 1962, 106 members of the Atlanta Art Association and their families travelled to Europe to see the wonders of Western Art. They had this crazy notion of creating a respectable arts center in the not-very-urbane Gone With The Wind town of Atlanta, Georgia - which in 1962 was known for commerce and trade, but not the arts. Though their dream was eventually realized, those 106 Atlantans did not get to see its fruition.

On Sunday, June 3, 1962, the Air France plane carrying the Atlanta arts group crashed during take-off from Orly Field in Paris. Of the 132 people on board (10 crew, 106 Atlantans) only two stewardesses survived. In short, the cream of Atlanta's arts community perished that day in Paris. Dream deferred. 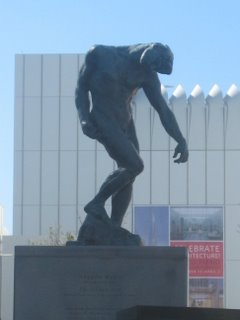 What grew out of the tragedy was the Atlanta Memorial Arts Center, now called the Woodruff Arts Center, which houses the High Museum of Art, the Atlanta Symphony Orchestra, and the Alliance Theatre. The Center opened in 1968, with the casting of Rodin's The Shade (L'Ombre) presented by the French Government to the city of Atlanta as a memorial to the individuals who died in the 1962 crash.

So that's the story of the statue with the bowed head that lives outside the arts center in Atlanta. You never know what will grow out of complete devastation and grief. Here's to you, members of Atlanta Arts Association. Your influence and love of art still ripple through Atlanta, Georgia in 2006.

harsh - just watched the bbc video. Its a shame that these ones will never see the arts center, but a fitting tribute !

That's a sad but an amazing story. So often out of tragedy comes hope. It's just a shame we have to go through the tragedy first!

Yes - the BBC video is haunting. Certainly no one in Atlanta would have seen it at the time (we take so much cross-media-pollination for granted nowdays), so it packs a mighty punch. Just to think that in 1962 some BBC guy was reporting on an airline crash that gutted an Atlanta community - amazing.