We called him Daddy 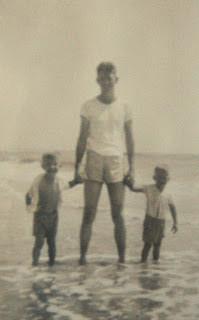 Daddy answered to several names, depending on which ring of the closeness circle you were in.

His name was Newell Clayton, but family members called him Clayton or Uncle Clayton (though when cousin Ann's daughter Julie was little, she called him "Playton"). Mother called him Clayt, though she often referred to him as Daddy, as mothers and daddies sometimes do with the other member of the team.

Daddy's circle of friends, however, called him Newell. This always confused me a bit, since his own parents, siblings and the rest of the clan called him Clayton. I don't know if that was because Newell was his first name and friends assumed that was what he was called, or what. Still, he'd've had to introduce himself as Newell when meeting someone for the first time in order for them to latch on to that name, right? I wonder why he used Newell for friends and Clayton for family. Wish I'd asked him.

Business acquaintances called him N.C. I heard him introduce himself as N.C. many times - it always sounded official and important. N.C. Frazier.

All well and good, those many names - Clayton, Clayt, Newell, N.C. But we called him the best name. We called him Daddy.

Here was a man who dared to venture forth from Chattanooga, Tennessee to California on a 3-week vacation with his wife and 4 children in 1959 in a station wagon that he'd rigged up a Rube Goldberg air-conditioning system. How brave can a guy get?

Here was a man who was loved by his children's friends, and why not? With a houseful of girls on a Friday night, he'd stop by the den to ask if we wanted anything special, then dart off to the grocery store to fulfill our food-whims. Always jolly and in a good mood, even after a hard week's work. The door was always open.

Here was a man who faithfully attended PTA meetings (though grumbled about it) and church (though he got to miss much of the service because his duty was to count the offering and take it to the bank) and school concerts. Support for whatever project was unwavering.

Here was a man who delighted in vegetable and flower gardens. Whenever I see or smell zinnias and marigolds and fresh tomatoes, it brings back days of helping (though probably more like hindering) Daddy in the garden when I was little.

Well. Call him what you will - N.C., Newell, or Clayton/Playton. It's on Father's Day that we remember him as Daddy.
Posted by MaryB at 10:11 AM

MaryB,
This is the Dad I always dreamed of having! I am so happy for you that you have these wonderful memories of such a great man.
Happy Father's Day to you and yours. Thanks so much for your comment on my blog. I appreciate your support and encouragement, always.

Yep, he sounds like a "Daddy" to me. You and I were lucky to have gooduns. Not all folks were so blessed.

Though you did not say so directly, I take it from everything being in past tense that he has gone to the big Daddy Meeting in the Sky, along with mine. What tales of us they must be telling, each trying to one-up the other...

As I wrote on Winston's blog, you and he have done your daddies proud.

The use of the term 'daddy' by grown-ups always surprises me; is it a Southern thing particularly?

Thanks for your kind comments, all.

And, yeah, Liz, Southerners do tend to call their fathers "Daddy" all their lives. (Only we pronounce it more like "Deddy," right Winston?)