On the sidewalks of New York 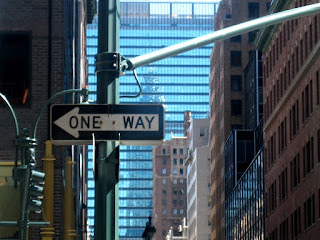 . . . So there I was, minding my own business, walking to the 116th Street subway station, when I felt three quick squeezes on my rear-end. I wheeled around - left hook ready to pop - when I saw the only person near enough to do such an ass-grab was a neatly uniformed school boy of about 12. Dark slacks, neat white shirt, horn-rimmed glasses - a scrawny little nerdy thing with his head down, trying to look innocent.

Well, I reeled in my left hook, and yelled "Hey!"

A girl walking behind me said "He seriously grabbed your butt!"

"And he's just a little kid!" sez I. We laughed as we made our way through the turnstiles.

"Well, I guess I'll take it as a compliment. If he'd been any older, though, I'd've slammed him."

Ah, the sidewalks of New York!

At lunchtime, I went out in search of a few things for my upcoming trip to Tennessee. New York's always in a rush - fine with me - but lunchtime is especially hectic. While walking down the sidewalk, the crowd had to slow down as two out-of-town business guys tried to figure out which way they needed to go.

I heard one ask the other, "So which way is First Avenue?"

Veering around them, not missing a beat, I pointed and said "Thataway!"

As they crossed Lexington to head toward First, one of the guys shouted to me: "I love you!"

"Love ya' back," shouted I and kept going.

So I've gotten a butt-grab from a 12-year-old and an "I love you" from the Out-of-Towners. Every day, an adventure!

I've noticed that these little happenings come in threes. Two down, one to go. What else awaits me today on the sidewalks of New York?

Nah. Monteagle's the closest I get to you. I have a conference there. I'm flying in and out of Chattanooga, because when I leave the conference on Friday, I head for Signal Mountain and a weekend with 4 of my childhood buddies. Back to NY on Sunday. Sorry I have to miss you this time around, Winston!

Wow, now that is a compliment! I thought they only did that in Italy.

Wowzer! I bet that put a spring in your step!

(This, more than ever, made me picture you as Rhoda - making your way in the big city - dealing with butt-pinchers!! Do you have a doorman?)

Hey, I was going to say it sounds like "Rhoda" too!

I WAS going to suggest that the next move would be to stand in the middle of the street and throw your hat up into the air...

pt: No, that was MaryTM. And that was Minneapolis. And that was the '70s. MaryB is in NYC, the year is 2007, we have an idiot in charge of ruining the country, and MaryB would get arrested.

How very benevolent of you to give that little nerdo a pass. Hope you don't read about him in the newspaper one day.

Things DO come in threes....hold on to your purse...and anything else that could be ripped from your body. OR....maybe you'll just get a nice hearty hug. Are they still doing that?

LOL. Yeah - the human connection! As can only be described with such perfection by you, MaryB. I love it! NYC!

Too funny, Mary. Was there a number three?