We're in the middle of a two-week orientation for new missionaries here at the Church Center (these are not Poisonwood Bible types, so get that out of your mind). Yesterday, the newbies were divided into groups of 3 or 4 (across age, gender, geographical lines) and sent forth into big, bad Manhattan on a sort of scavenger hunt. Each was given a list of locations to visit - from Abyssinian Baptist Church in Harlem to Times Square, Little India, and Chinatown - and instructed to bring back proof they'd actually found the places on the list.

It was an exercise in navigating unfamiliar territory - and yes, while different from the territory to be faced in Northern Uganda or Honduras, Manhattan can be as alien as it gets if you're not familiar with the place. These folks were on their own, with subway/bus maps and fresh MTA cards to help them on their way. 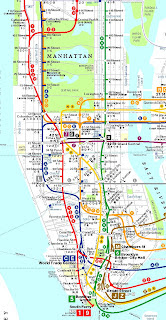 We kept our fingers crossed that all would show up by the 6pm deadline at the designated fabulous Chinese restaurant near Trinity Wall Street, and lo and behold! they did. One group was about 15 minutes late, but none the worse for wear, so there you go.

During dinnertime conversation the stories of New York started pouring out - negotiating the subway (missed/wrong stops), the food (Katz's Deli of When Harry Met Sally fame was a favorite), the characters (the Bell Lady in Little India, the Naked Cowboy in Times Square), the sheer number of people on the sidewalks. But every person - every one - said that the biggest surprise was how friendly and helpful the people of New York are.

New York City denizens get a bad rap about being unfriendly. I've never found New Yorkers unfriendly or threatening. If anything, they're overly-jolly and helpful to a fault. You don't have to ask for directions - just pause on a sidewalk or subway platform, and someone invariably asks "Do you need help? Where are you trying to go?" And this was how it was for the folks on yesterday's adventure. People offered help - the groups rarely had to ask.

I guess too many people get their New York images from The French Connection, Midnight Cowboy, and The Out-of-Towners. And I have to admit, I stayed clear of the city during the 70s and 80s, so perhaps the place really was Scary-Town during those years. But I've always found New Yorkers - whatever race/creed/color/national origin - friendly (for the most part) and helpful. And catalysts for the most wonderful New York stories.
Posted by MaryB at 7:53 AM

New York is one of the few places I've visited and then it was only for about five days, but I really liked it and want to go back some time.

The most unpleasant person we encountered in New York was an usher in the theatre we watched Les Mis in. There was a queue outside the Ladies and he was really bossy about where we should stand, and generally unfriendly.

The waitress who asked where we came from and then said, 'Wayels?' in a bemused voice wasn't rude - just uneducated about my homeland!

Mary, I heard today that NYC has been named The Safest Big City in the U.S. It's all changed since you've moved there!

I think the scavenger hunt sounds great and something I'd love to do. I must admit to not taking the subway after having a creepy experience there when a bunch of us went for a weekend when we were about 18 (a long, long time ago). Now we walk or take a cab if we must (Boston cabbies are far worse drivers). Next time I'll be sure to try mass transit.

Question for Liz: How do you pronounce Wales? Sadly, we Rhode Islanders sound a lot like New Yorkers, and I'm sure I pronounce it Wayels, too!

Elsie, that's a hard one! Wails (as in the Wailing Wall!) or Waylls, maybe.

Would have loved the experience too! Always wanted to come over to NY and you have made it more appealing with this story.

Nice, maybe one day!! Likely be going to visit friends in California next year. Thats poles apart in lots of ways from your area i know. To be honest I definately did not think Californians stood out as friendly and shop assistants just rubbed me up the wrong way. Anyway enough of that. ha ha

Liz, well anyone'd be surly having to usher Les Mis repeatedly. ;-) And I do know the proper way to say "Wales," but I'm not sure I can actually do it. How about "Cymru"?

Elsie and Chux - say the word, and I'll work up a good little NYC scavenger hunt for you. (Then we'll meet for an excellent meal afterwards.)