"I know my place" 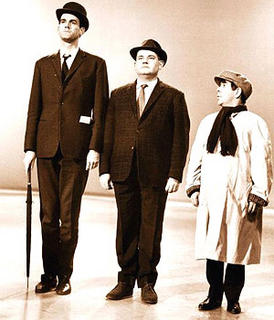 I mentioned the passing of the great Ronnie Barker in my last post, realizing that most American haven't a clue as to who he is. I spent a lot of time in England during the 70's - time at Oxford, plus some work time and some play time - so got very familiar with the funnies of the day. By the time I lived over there, Ronnie Barker and Ronnie Corbett were going strong with their TV show "The Two Ronnies," but they'd started out on the 60's program "The Frost Report" (yep, David Frost).

One of the most famous (British) comedy sketches ever was "I Know My Place," with John Cleese, Ronnie Barker, and Ronnie Corbett on the Frost show. Here's the scoop on it:

"Of all the send-up's that appeared on The Frost Report, the best remembered, and often held as representative of the shows style was the Marty Feldman/John Law penned sketch about class. This involved 6ft 5inch Cleese standing next to 5ft 8inch Barker who in turn stood next to 5ft 1inch Corbett, and using each man's height to illustrate their standing in society. Middle-Class Barker explains: 'I look up to him (Cleese) because he is upper class but I look down on him (Corbett) because he is lower class.' Corbett: 'I know my place.' The sketch lasted no more than a few minutes but remained in the memory for so long that some thirty or more years later Ronnie Barker came out of retirement to make an updated version for a TV special with Ronnie Corbett (John Cleese was unavailable so Stephen Fry stood in for him)."

I have the sketch on an LP (you know - those 12" vinyl things we used to play on a machine called a "record player"), but I've never seen the video. From the picture above, though, John Cleese looks to be about 12.
Posted by MaryB at 2:47 PM

He was an oddly sad character in his final years. He wanted to quit while he was ahead, he said, so he retired - but nobody ever quite believed his reasoning. One guy on the radio yesterday said that Barker wanted to retire before he reached the age that a lot of the comedy greats had died at.

Then again, he never seemed to have quite retired completely. he came back to present compilations of Two Ronnies sketches, and there was the BAFTA tribute last year.

Porridge was my favourite thing he did. Tragic to think that his co-star Richard Beckinsale was just 31 when he died - he'd be 58 now.

I only saw a couple of Porridge episodes - sounds like another show that BBC America could pick up and share with us. I'll scour around to see if I can get it on DVD here.

If you've never seen Porridge, you're in for a treat. It was written by Dick Clement and Ian La Frenais, who wrote The Likely Lads, among other things.

"What have I learned, Mr Mackay? Three things. One - bide your time. Two - keep your nose clean. And three - don't let the bastards grind you down."